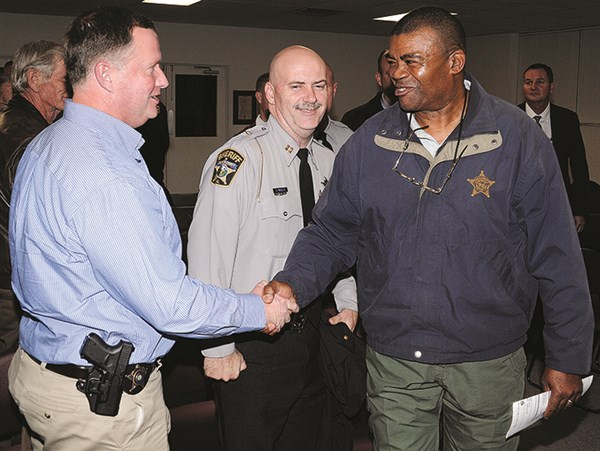 Maj. Lewis Hatcher became Sheriff Lewis Hatcher Tuesday morning, hours after Columbus County Commissioners appointed him to the post Monday night.
Sheriff Hatcher and his staff were sworn into office Tuesday morning at the Columbus County Courthouse.
Hatcher was recommended for the post by outgoing Sheriff Chris Batten, who has resigned to take a state job.
Commissioners met for about 20 minutes in closed session with Hatcher, and in open session agreed to the appointment, with Hatcher’s salary unchanged from his pay as Chief Deputy at $64,000 per year.
Batten’s salary was about $70,200 per year, County Manager Bill Clark said.
Hatcher said he was satisfied with his pay, which could be adjusted if he is elected sheriff later this year. He has previously announced plans to run.
Look for more on this story in the Jan. 8 Tabor-Loris Tribune print edition.