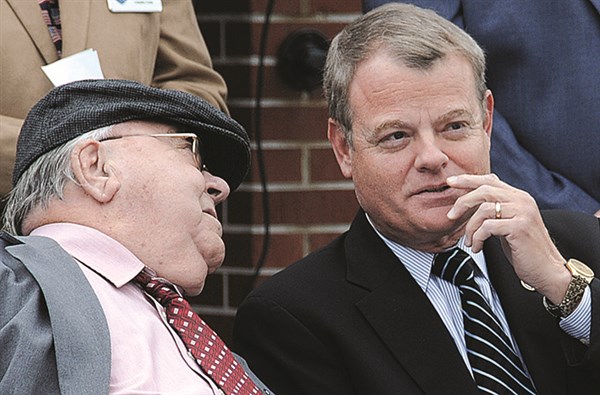 Congressman Mike McIntyre (right) chats with Ed Worley, then director of the Columbus County Department of Aging, during a 2010 event. (Deuce Niven photo)

Congressman Mike McIntyre, in his ninth term in the U.S. House of Representatives, will retire at the end of the current session, he announced Wednesday.
A Democrat, he has represented Columbus County in North Carolina’s Seventh District, even as those political lines have changed.
His official announcement is here:
“In eastern North Carolina, we have demonstrated that public service is a partnership between the people and the representative they entrust to speak on their behalf.
“For us, this has been where the priorities of policy over politics, issues over ideology, dialogue over dollars, and cooperation over campaigning have prevailed.
“Having answered the call entrusted through this partnership, I will be retiring from the U.S. House of Representatives at the end of this term.
“This partnership has transcended politics and allowed us to accomplish monumental tasks, such as quadrupling the number of veterans’ clinics in our area, passing the tobacco buyout, expanding our military bases, establishing an economic commission to promote jobs and fight poverty—and ensuring that the North Carolina coast will continue to be an economic engine and environmental treasure.
“We also have built new fire and police stations, town halls, and workforce development centers; opened new farmers’ markets and senior centers; improved airports and the Wilmington Port; and expanded educational and recreational opportunities for our children and youth.
“We have helped thousands of constituents from all walks of life in ways that have significantly impacted their lives.
“None of this could have been accomplished without the strong commitment of my family, the hard work of my staff, and — especially — the willingness of people throughout our region to put partisanship aside and work together to get things done for the betterment of eastern North Carolina.
“Indeed, I am grateful to all of the Democrats, Republicans, and Independents with whom we have successfully worked through nine elections over 18 years.
“My family and I are ready for a new chapter and excited about new opportunities to continue helping North Carolina.
“My prayer is that those in public service will always put the people they represent first and that God’s blessings will continue to be upon the great citizens of the Seventh Congressional District who live, work, worship, play, serve, and retire in eastern North Carolina.”
Look for commentary on McIntyre’s departure, and the 2014 political landscape, in the Jan. 15 Tabor-Loris Tribune print edition.
Posted in News