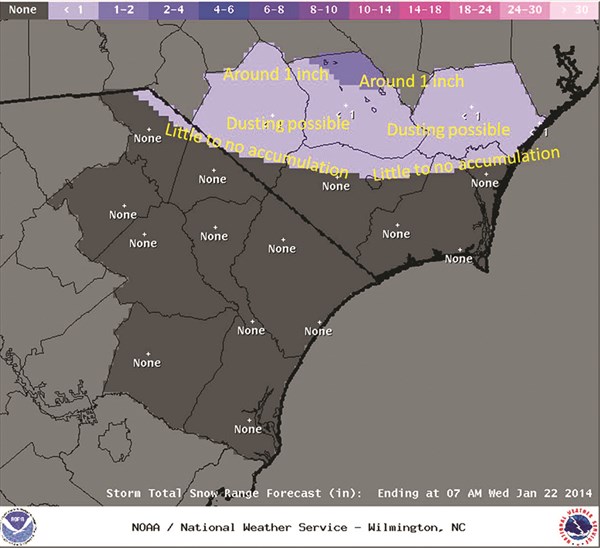 Columbus County Schools will open for students and staff at 10 a.m. Wednesday, in anticipation of some wintery weather leaving roads unsafe early in the day, Superintendent Alan Faulk said Tuesday.
Whiteville City Schools will operate on a two-hour delay.
While the National Weather Service forecast is for the area to be largely spared from winter precipitation, Faulk said the NWS map showing a chance of snow in northern Columbus was troubling.
Rain began falling in the Whiteville area before 3 p.m. Tuesday, compounding the worry, Faulk said.
“We’re going to be cautious,” Faulk said.
Weather won’t be a worry Thursday or Friday. Both were previously scheduled as no-student days for the county schools.

Weather briefing
Bitter cold is returning to the Tabor-Loris Community (TLC) tonight and early Wednesday, but wintery precipitation is expected to miss much of Columbus and all of Horry counties, a National Weather Service briefing issued Tuesday says.
Prepared by Steve Pfaff of the NWS in Wilmington, the 1:15 briefing says winter weather is expected to impact “primarily inland portions of southeast NC. A briefing map shows some chance or precipitation in northern Columbus County, with “little to no accumulation.”
Here is the briefing:
Overview: An area of low pressure will push a cold front off the coast during the late evening. As the front shifts toward the east cold air will filter into the region and interact with lingering moisture in the front’s wake to produce light rain then light snow and flurries. All precipitation will end from west to east across the area during the early morning hours.
Current Watches/Warnings/Advisories: A Winter Weather Advisory is in effect for Robeson, Bladen, and inland Pender Counties beginning 9 PM EST tonight.

Confidence: The confidence for this event is Moderate but the atmosphere will not have as much moisture to work with as it does farther north where this system will produce heavier snowfall.
Impacts: Expect some travel impacts especially the farther north you travel. Any light accumulations across northern portions of Robeson, Bladen, and Pender counties will mainly have an impact on elevated road surfaces and bridges. Otherwise any light accumulation would mainly occur on grassy surfaces.
In addition, the Wind Chill will be around 10oF Wednesday morning. If you go outdoors wear multiple layers of clothing and avoid any long exposure to the cold.
Accumulations: Little to no accumulations are expected across most of southeast NC, while amounts to 1 inch are possible across northern portions of Robeson, Bladen, and Pender counties. (see map for details)
Timing: Precipitation will develop this evening then a light snow and flurries is possible by late this evening. The light snow and flurries will come to an end during the early morning hours as any lingering moisture in the wake of the front finally exits the area.
Posted in News