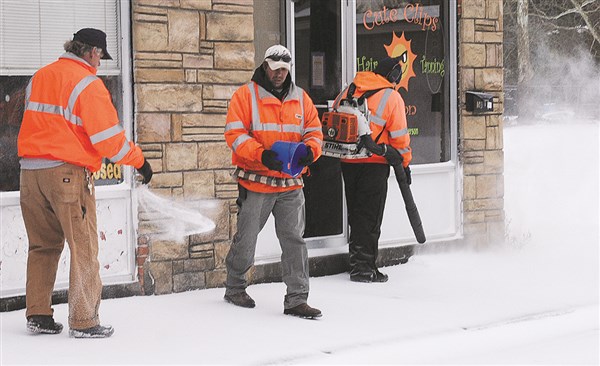 Columbus County, Horry County, and Whiteville City Schools will be closed Thursday.
Students and staff will be out for the Columbus County Schools. In Horry County school district offices will open at noon, and staff members across the county will be expected at work at noon, also.
Decisions on classes for Friday will be made Thursday afternoon, school officials said. Saturday classes are possible, at least in Columbus County, Supt. Alan Faulk said.
“We will have school Saturday, if possible,” Faulk said. “We’re looking at a half-day for Saturday. And we may have to do a late start for Friday.”
If classes are open Thursday and Friday, Columbus County students will be in school on Feb. 21 and March 28, two previously scheduled teacher work days, Faulk said.
Scheduled make-up days for the Horry County Schools are Feb. 17 and March 28, spokeswoman Teal Harding said. Make-up days on a Saturday are possible, but so far none have been scheduled, she said.
“Hopefully we won’t miss any more days,” Faulk said. “If we do, we’ll be moving into the Easter break for make-up days.”
Classes at Horry-Georgetown Technical College are cancelled for Thursday. Decisions regarding classes at Coastal Carolina University and Southeastern Community College had not been announced by mid-afternoon Wednesday.

Local Government
Columbus County offices will be closed on Thursday.
Tabor City Hall will open at 11:30 a.m., if conditions permit, Town Manager Al Leonard said. A decision not to open could be made Thursday morning.
A decision on opening Loris City Hall on Thursday will be made later today, Mayor David Stoudenmire said. A delayed opening seemed likely.
Horry County government offices re-opened at noon Wednesday, and the county resumed to normal operations. Those offices will also delay opening on Thursday until noon.
Keep checking this post for updates on closings as they become available.

Noon post
Temperatures won’t make it to 30 degrees today, and roadways will remain tricky to travel through most of the Tabor-Loris Community and in broad sections of Columbus and Horry counties, emergency officials said.
Decisions on area schools, city offices in Loris and Tabor City, and Columbus County offices for Thursday were not expected before mid-afternoon on Wednesday.
In Horry County, government offices in Conway were open at noon, and the county’s operations level was back to normal (OPCON 5), after being set at OPCON 1 on Tuesday.
Roadways in much of Columbus County were covered with ice, Emergency Services Director Kay Worley said, while state Department of Transportation crews were focused on just one highway.
“They’re putting their resources on U.S. 74,” Worley said. “They’re not working on anything else right now.”
A major east-west artery through North Carolina, U.S. 74 is the county’s only four-lane divided highway and a DOT priority both locally and regionally.
Town workers in Tabor City were spreading salt on sidewalks and using blowers to clear walkways downtown. Traffic was light, though fairly constant on the streets.
Getting salt down today was important, Public Works Director Donald James said.
“Once it freezes hard tonight, we won’t be able to do a thing with it tomorrow,” James said.
Updates on school and other closing decisions will be posted here, as they become available.
Look for a complete update on this winter weather event, with more photos, in the Feb. 5 Tabor-Loris Tribune print and on-line e-editions.