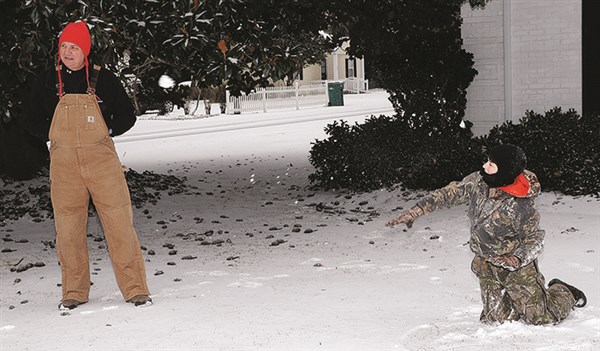 With emergency vehicles falling victim to icy road conditions in Columbus County on Thursday, and temperatures barely reaching the freezing mark in some locations after 1 p.m., the decision on public schools for Friday was an easy one, Columbus County Schools’ Supt. Alan Faulk said.
“No school on Friday, or on Saturday,” Faulk said.
Faulk on Wednesday had scheduled classes for Saturday, hoping for at least a half-day of classes Friday. But National Weather Service forecasts and emergency officials were offering virtually no hope for safe roadways for Friday morning, though forecast highs for the day in the mid-50s should finally provide a chance for some snow and ice melting to take place.
Horry County Schools will also be closed for students on Friday, the district announced. Contract employees who work more than 220 days per year are advised to be at work by 10 a.m., “unless road conditions prevent safe travel,” the district said.
Columbus County offices will open at 10 a.m. Friday. Tabor City Hall will open at 10:30 a.m. Friday.
Information on decisions other agencies and institutions was not available at 4 p.m. Thursday. Keep checking this story for updates as they become available.
Trash pick-up in Tabor City and Columbus County will be delayed one day, Waste Management local manager Wade Jernigan said. In Tabor City Friday pick-up will take place on Saturday. In the county, Thursday pick-up will be Friday, Friday pick-up on Saturday.
Some short, hard to reach streets and roads may be missed entirely this week, Jernigan said.
“If we’re unable to reach them this week, people can put excess garbage in bags beside the cans next week and we will get them,” Jernigan said.

Treacherous roads
A serious auto crash on SC 9 Business east of Loris involved a truck plowing through the Third Base Bar & Grill, officers manning traffic control checkpoints said Thursday afternoon.
A Tabor-Loris Tribune reporter was denied access to the crash scene. There was no information immediately available on the number or severity of any injuries, and no immediate confirmation on if road conditions were a factor in the crash.
A Tabor City Fire Department engine slid into a ditch on the way to a call Wednesday night, and Nakina Fire and Rescue reported two incidents where its ambulance slid into a ditch, both on NC 905, Columbus County Emergency Services Director Kay Worley said.
“905 is bad,” Worley said. “Most of our wrecks have been on 905. 410 is a sheet of ice, but people are either staying off of it or being very careful, we haven’t had a lot of wrecks there.”
Most primary roads, including US 74-76 and U.S. 701, were clear with traffic moving smoothly Thursday morning, Worley said. Most secondary roads were all but impassible.
“It’s ice,” Worley said, “and not much melting is happening. We had thought it would get a little warmer today, but so far that has not happened.”
Her message, echoed by emergency officials throughout the region: Stay off the roads unless it is absolutely necessary to travel.
Look for a complete wrap-up of this week’s weather event in the Feb. 5 Tabor-Loris Tribune print and online editions.