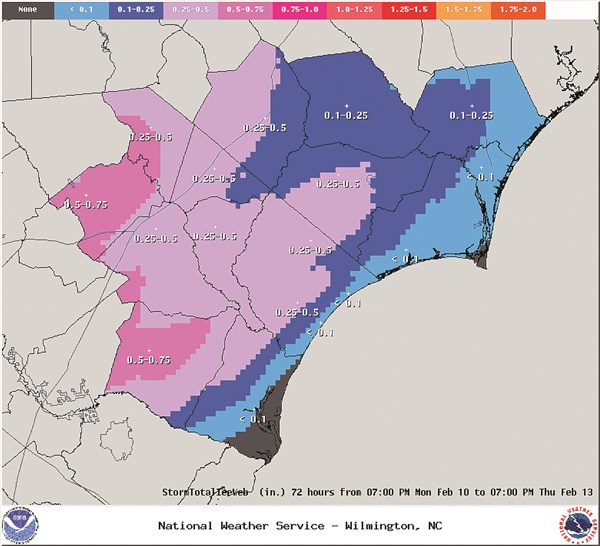 5:20 p.m. update
Add Horry County Schools to the lists of closings for Wednesday.
Students will have the day off, another one to be made up later, while 12-month employees are instructed to report to school, on time, as conditions allow, a school district news release said.

2:40 p.m. update
There will be no classes Wednesday in the Columbus County and Whiteville City schools, Columbus Christian Academy and Southeastern Community College, officials said Tuesday as wintery precipitation was beginning to cause problems in broad sections of the county, primarily in the north.
More than 3,000 Brunswick Electric customers in Columbus County, from Evergreen and Cerro Gordo to Hallsboro, were in the dark in the early afternoon.
Temperatures in the county were hovering at the freezing mark in southern Columbus, just a little bit below in northern and western section, with freezing rain causing ice to accumulate on tree limbs and electric lines, causing the power disruptions.
By mid-afternoon today county offices and most, if not all municipal offices in Columbus County were closed. The impact was less severe in Horry County, apparently just below a dividing line between rain and ice. Decisions on closing schools in Horry on Wednesday won’t be made until 5:30 a.m. on Wednesday, school officials announced.
Superior Court in Columbus County was also closing at 3 p.m. Tuesday, and will be closed on Wednesday. District Court in Columbus and Bladen counties will be closed Wednesday.
In South Carolina courts statewide have been ordered by the Chief Justice of the South Carolina Supreme Court to close on Wednesday.

Tuesday morning post, with updates
Winter weather closing in on the Tabor-Loris Community today has already prompted closings and schedule changes, with others sure to come in the coming hours.
Columbus County has declared a state of emergency, effective at 1 p.m. today, and opened its Emergency Operations Center at the same time. Telephone numbers for the EOC are 910-642-7684 and 910-642-8193.
A state of emergency declaration is a necessary first step to make the county eligible for federal disaster relief funds, should the storm result in damages that the county could seek help for.
Columbus County offices are closing today at 3 p.m., while Horry County government operations moved from OPCON 5, normal, to OPCON 4, this morning.
Schools are closed in Columbus County today, open in Horry, with school officials on both sides of the state line weighing the impact on more snow days after losing four days last month with safety concerns.
“If we’re going to err, it’s going to be on the side of caution,” Columbus County Schools Supt. Alan Faulk said before making his decision to close schools today. A decision on Wednesday classes will be announced this afternoon for the Columbus County schools.
Southeastern Community College will close at 3 p.m. today, with all classes for Wednesday also cancelled.
After school programs in the Horry County Schools for today have been cancelled, with the exception of afterschool child care, the district announced after 1:30 p.m. A decision on school closings or delays for Wednesdays will be made at 5:30 a.m. Wednesday, and announced through regular means then.
Though many evening activities for Tuesday have been cancelled, Tabor City Council’s regular meeting will go on as scheduled, Town Manager Al Leonard said. Several agenda items require council action today, Leonard said.
“I’ve told council members that if they have trouble getting here, I’ll send the police in a Tahoe to give them a ride,” Leonard said.
Council meets at 7 p.m. in the District Court Building on West 4th Street.
Keep checking this page for updates on closings and schedule changes as they become available.

Prepare
OPCON 4 means Horry County is on “Alert” status, monitoring the storm closely, with forecasters late this morning moving the line dividing rain and ice a bit to the south.
“Horry County is reviewing all operational plans and will keep everyone aware of any changes in the forecast and will take appropriate action when necessary,” a county news release said.
Precautions urged by emergency officials include:
·      Remember the usual emergency supplies: a flashlight and batteries, a battery-powered radio, extra non-perishable food and water, extra medicines and baby items, and first-aid supplies.
·      Freezing temperatures can burst water pipes in homes that lack heat or proper insulation. Wrap exposed pipes or take other measure to insulate them from the cold.
·      Prepare a place indoors for pets. Move farm animals to shelters and have extra feed and water available.
·      Residents are encouraged to check on elderly and at-risk neighbors and relatives due to the increased potential for power outages and cold temperatures.
·      Use caution when traveling on roads.
·      Use caution when walking in parking lots and on sidewalks.
·      Check with airlines as flights may be delayed or canceled.
For more information on winter weather safety tips for your family and pets, visit the American Red Cross website at http://www.redcross.org/prepare/disaster/winter-storm.