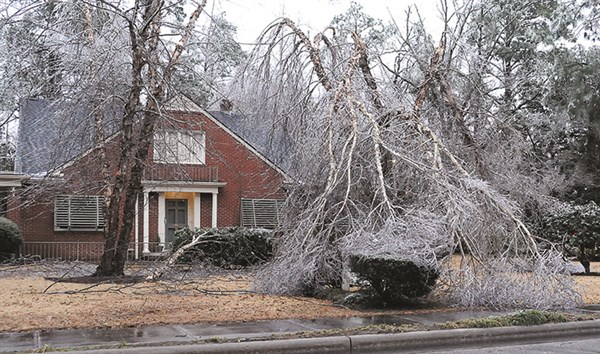 4:30 p.m. post
Schools will be open in Loris Friday, closed for the Green Sea Floyds schools, where electrical power was still out late Thursday, the school district announced.
Schools will also be closed in Aynor, and at Midland Elementary, for the same reason.

2 p.m. post
Schools in Columbus County will remain closed Friday, with power still out to half of the county school’s 18 campuses Thursday, Supt. Alan Faulk said.
“We’ve got nine schools with no power, nine with power,” Faulk said. “It’s a mess.”
None of the schools in eastern Columbus have power, and only one in the Chadbourn area – Chadbourn Elementary, had power restored at mid-day Thursday, Faulk said.
See more on power company conditions below.
Classes will resume for the Columbus County and Whiteville City on Monday, “hopefully,” Faulk said.
A decision on school openings for Friday in Horry County should come shortly after 3 p.m., a district spokeswoman said. We will post that here, once it’s available.

OPCON 1
A full day after widespread power failures caused by what the National Weather Service described as an “epic” winter weather event, Horry County government has moved to OPCON 1, it’s highest operating condition level, putting the county at “Disaster Operations” stage.
Command staff from Horry County Emergency Management are managing the event, but the county has not opened its Emergency Operations Center and there have been no shelters opened.
Major issues continue to be downed trees and tree limbs blocking roads and downed power lines, with Loris and Green sea two of the hardest hit areas, with Conway and Aynor facing similar challenges. Drivers were urged to use caution due to tree debris and downed power lines.
Horry County’s top priority was to clear roads of debris for vehicle access, stabilizing the county road network, and removing vegetative debris from the county-maintained public right-of-ways.
At 2 p.m. Santee Cooper Electric was reporting more than 1,000 outages impacting more than 7,000 customers, almost all in Horry County. Horry Electric was reporting more than 13,000 customers without power.
In Columbus County about 2,700 Brunswick Electric customers were still without power, a number that was declining by the house. Duke Energy Progress was reporting nearly 4,000 active outages, and some customers were being told it would be Saturday before power was restored.

Debris
Residents in the unincorporated areas of Horry County who need to dispose of their yard debris due to the winter storm, can take it to one of the 24 recycling centers and a link to the locations of the centers can be viewed at http://www.solidwasteauthority.org/recyclingcenters.html. Horry County does not provide curbside trash pick-up services, as the unincorporated millage pays for the 24 recycling centers located throughout Horry County. The Horry County Solid Waste Authority is prepared to handle the large volume of vegetative debris that is expected to be disposed of at the centers.
Due to warmer weather conditions expected this weekend, homeowners are urged to use extreme caution when burning vegetative debris that has fallen from the winter storm.
•    Before doing any burning, establish wide control lines down to bare mineral soil at least five-feet wide around any burn barrels and even wider around brush piles and other piled debris tobe burned. The larger the debris pile, the wider the control line that is needed to ensure that burning materials won’t be blown or roll off the pile into vegetation outside the line.
•    Stay with all outdoor fires, until they are completely out.
•    Keep water and hand tools ready in case your fire should attempt to spread.
•    Homeowners are responsible for the control of their outdoor fires.

11 a.m. post
With thousands of residents still without electrical power throughout Columbus County Thursday morning, the American Red Cross was mobilizing to open a shelter in Whiteville.
Scheduled to open at 1 p.m., the shelter will be located at Edgewood Elementary School, 317 East Calhoun Street in Whiteville.
More than 5,000 power outages remained in Columbus County at mid-morning Thursday, about 3,400 outages reported by Duke Energy Progress, 2,000 by Brunswick Electric Membership Corp.
Horry Electric was reporting nearly 600 outages impacting more than 17,000 customers, while Santee Cooper Electric reported more than 2,300 customers without power in an area that includes Loris and Conway.
Decisions on school openings will be made later today, Columbus County Schools Supt. Alan Faulk said. Unless power is restored to broad sections of the county more quickly than power officials were anticipating, classes on Friday were not looking likely, Faulk admitted.
Saturday classes were being considered, but if there is no school Friday, there will be no classes Saturday, either, Faulk said.
“My Daddy said never start something on Saturday,” Faulk said.
Power outages have also forced public libraries in Green Sea and Aynor to close. They will re-open once power is restored.
Keep checking here for updates, as they become available. We are leaving our paywall down through this weekend, giving everyone full access to our complete editions as recovery from this storm continues.
Look for a complete recap of this week’s events in the Feb. 19 Tabor-Loris Tribune print and online editions.