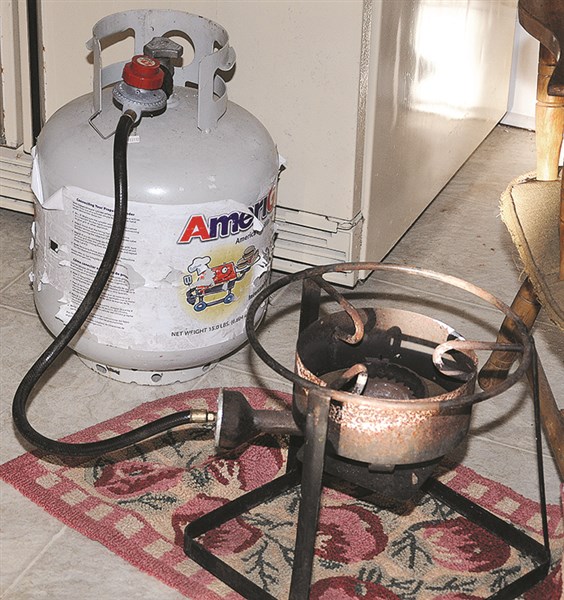 A dangerous source of indoor heat may have sent elderly TC man to the hospital Friday. (Deuce Niven photo)

6 p.m. Fri. update
Shelter, food & water
Firefighters from the Tabor City Fire Department found few takers for food and water in areas where power was still out on Friday, two days after this week’s brutal winter storm left thousands in the region without power.
Power companies swarmed the region on Friday, restoring electricity to many. In Tabor City, crews from Ohio based Thompson Electric received warm greetings from residents in several areas without power since Wednesday, and some plunged into darkness Thursday as a transformer serving the neighborhoods around the Tabor City IGA blew.
By late afternoon the lights were on at the IGA, shoppers in the store, though coolers and freezers were empty. Most perishable goods, all that required refrigeration or freezing, were thrown away after the power failed, manager Joey Stevens said.
A shelter was established at the Tabor City Fire Department on Friday, Fire Chief Jerry Hodges said, after a Tabor City Emergency Services crew Thursday night took an unconscious man to the hospital who was in a home with no heat.
Columbus County’s only shelter, in Whiteville, had 28 people inside Friday morning, Emergency Services Director Kay Worley said.
“Our people aren’t going to Whiteville for a shelter,” Hodges said.
Hodges said the shelter, at the fire department on West 4th Street, can handle about 30 people. It may be unused in the late stages of this event, Hodges said.
“We need a shelter in Tabor City, and we’ll be ready for the next one,” Hodges said. “Hurricane season will be here before you know it.”
Pre-packaged foods provided by the American Red Cross, similar to military MREs, were picked up by the fire department Friday afternoon, and bottled water, are also available at the fire department, Hodges said.
“They will last for several years,” Hodges said. “We’ll have them for next time.”

Be safe
Firefighters and an EMS crew responded to an elderly man with chest pains Friday morning, staying warm inside by use of a of a propane gas cooker designed for outside use.
“That’s not good,” Hodges said.
The man appeared in good condition, and Hodges said he may have been lucky. Carbon monoxide from the cooker, designed for outdoor use, could have killed him.

Friday morning post
Hot meals and bottled water are on their way to Columbus County, with distribution expected to begin early this afternoon, Emergency Services Director Kay Worley said Friday morning.
Fire and EMS departments will be picking up those goods at the 911 Center in Whiteville, and distributing them in their communities.
In Tabor City, that distribution will begin about 12:30 p.m, Fire Chief Cherry Hodges said.
“We’ll start out in town, then move on out from there,” Hodges said.
Anyone in need of food or water because of the lack of power should contact their local fire or EMS department in Columbus County, or the county Emergency Operations Center at 910-642-7684 or 910-642-8193.

Debris, power woes
Bapitst Men have teams available to assist those who need assistance in removing downed trees and limbs, Worley said. Those in need of that kind of assistance should provide the individual’s name, address, and phone number to Worley by email at kworley@columbusco.org.
There are several areas in Tabor City still without power, including the Jones, Prince and Princess, and Anderson Street areas.
Tabor City IGA and other stores in that East 5th Street shopping center were without power again today, victim of a transformer failure Thursday.
Numerous areas in southern Columbus and northern Horry remain without power this morning, too. Outage totals late this morning in Columbus and Horry counties were, Columbus: Duke Energy – 8,000, BEMC – 2,350, Four County – 120; Horry: Horry Electric – 7,200, Santee Cooper, 959.

Shelter
An American Red Cross shelter established Thursday at Edgewood Elementary School in Whiteville had 28 people at 8 a.m. Friday.
Keep checking this story for updates as they become available, and see the Feb. 19 Tabor-Loris Tribune print and full on-line editions for a complete recap of this week’s winter storm and aftermath.