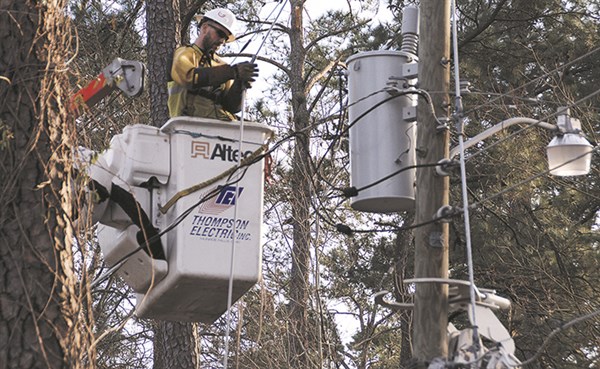 A lineman from Ohio based Thompson Electric at work on Anderson Street Friday. (Deuce Niven photo)

A county-wide boil water notice has been issued by Columbus County Health Director Kim Smith for those who lost power as a result of the winter storm, and who are served by private well.
Those people should boil water vigorously for two minutes before using water to drink, to cook with, or to bathe with, Smith said. These precautions should continue for 24-hours after water is restored.
Bacteria can infiltrate any water system when pressure is lost, Emergency Services Director Kay Worley said. Boiling water can prevent illness that bacteria can cause.

Power restored
Power had been restored to much of the county by Saturday morning, with restoration efforts expected to near 100 percent by the end of the day, utility officials said.
Duke Energy was reporting about 6,000 Columbus County customers still without power at mid-morning Saturday, with BEMC showing just 165 to be restored, Four County just three.
Emergency Services officials still have heater meals and bottled water that can be issued to fire and EMS departments for distribution to those still without power, Worley said.
Five residents remained in the county’s shelter at Edgewood Elementary School in Whiteville Saturday morning. No one used the shelter opened at the Tabor City Fire Department Friday afternoon, Fire Chief Jerry Hodges said Saturday. Most people in and near Tabor City had power restored by Friday evening, largely through efforts of crews from Ohio based Thompson Electric, who rolled into town Friday morning.
With conditions rapidly improving, plans to downsize the county’s Emergency Operations Center Saturday afternoon were being considered during the morning, Worley said.
Check back here for updates as event warrants, and see the Feb. 19 Tabor-Loris Tribune print and full on-line editions for a wrap-up on the winter storm and its impact.