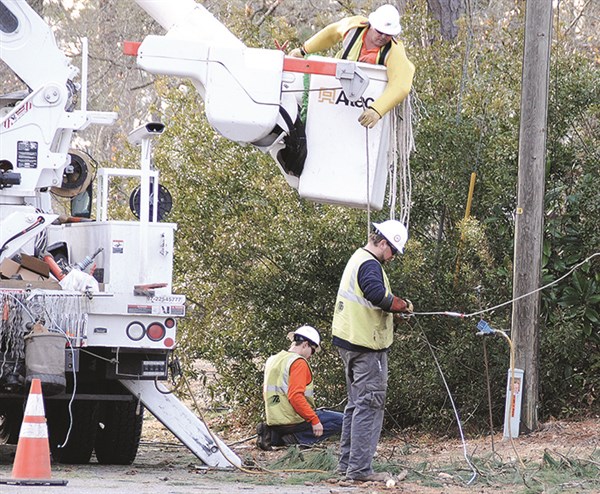 A contract crew from Ohio based Thompson Electric was in Tabor City Friday, after making the trip to support Duke Energy Progress. (Deuce Niven photo)

Duke Energy Progress will be getting a formal letter expressing disappointment in its handling of last week’s ice storm and its aftermath from Columbus County Commissioners, while a pair of electric cooperatives will be getting praise.
Commissioners were critical of Duke’s storm preparation and response after an inch or more of ice that blanketed the county last Wednesday disrupted power to 95 percent of the county’s residents and businesses.
A Duke spokeswoman said a company response to the Monday night complaints might not be available before Tuesday.
Commissioners said they were impressed by Brunswick Electric Cooperative and Four County Electric, cooperatives that seemed better prepared to restore power more quickly than the much larger Duke Energy Progress
Criticism of Duke fell in two areas, pre-storm efforts to prevent problems by trimming limbs away from power lines, and what appeared to be a lack of coordinated response in the aftermath.
Getting power restored took too long, commissioners said, with some in Columbus not getting power restored until Sunday.
Commissioner Buddy Byrd was the most vocal in his criticism.
“This long outage was partially their fault, because they have not maintained these lines,” Byrd said.
Byrd said that one two Duke employees in one truck were managing as many as 100 trucks waiting for assignments in the Lake Waccamaw area.
“I think they could have done a better job by sending more people here,” Byrd said.
Look for more on this story in the Feb. 19 Tabor-Loris Tribune print and full on-line editions.
Posted in News