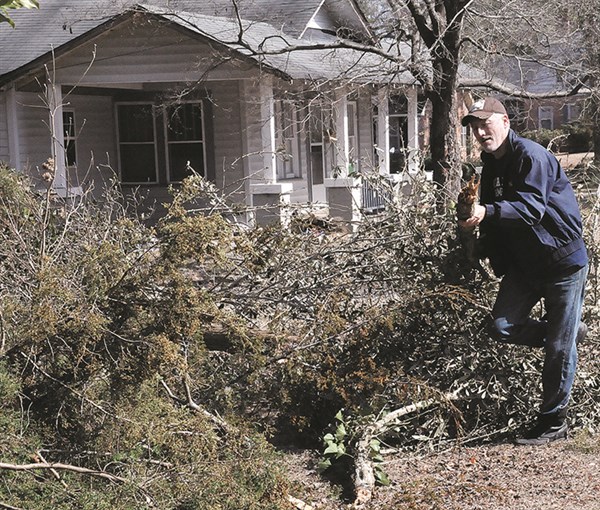 Debris cleanup got started quickly after recent winter storms, including this effort in Tabor City. Many living outside of towns will consider burning that debris, and should use caution, forestry and fire officials say. (Deuce Niven photo)

Getting rid of debris from our recent winter storms comes with risks that can’t be ignored, forestry officials in the Carolinas warn.
A news release from the South Carolina Forestry Commission, issued Friday, contains advice that’s good anywhere. That text follows:
Wildfire activity Thursday may have been a signal to the Forestry Commission that an active weekend lay ahead.
SCFC crews responded to 35* fires statewide Thursday.  Most began as debris burns which escaped and became woods or grass fires.  Some spread to structures.  More than an estimated $273,000.00 in structure damage/losses were reported to SCFC dispatch centers—  all in one day.
“It’s clear that after a wet winter thus far and a major ice storm behind us, our wildfire season is finally here,” says Scott Hawkins, public information director with the Forestry Commission.  Wildfire activity always picks up at some point in late winter/early spring in the southeastern U.S.
Although Friday’s rain meant for a quiet day, SCFC anticipates an uptick in debris burn notification calls over the weekend.
Thursday’s calls totaled 1,757 as of 6pm.  State law requires a call to the Forestry Commission before burning.  There is a direct correlation between the number of debris burn notifications and wildfire activity.   Warm weather is coaxing many folks outdoors to do storm cleanup, officials believe.  For many people in unincorporated areas, this means vegetative debris burns.  SCFC recommends burning smaller piles and being aware of changing wind speed and direction.  A list of burning guidelines is attached.
Almost half of all SC wildfires begin as escaped debris burns and Hawkins notes that because of the recent ice storm, the “fuel load” for wildland fire is heavier than normal in some places.
“We know folks want to put the storm behind them and one way to do that is to burn off downed limbs and branches on their property.  Our fire staff just wants to make sure everyone understands and respects the factors that can cause a debris burn to turn into a wildfire they’re unable to stop,” Hawkins said.
Statistically, wildfires peak on Saturday afternoons when people are active outdoors, winds are at their highest, and fuel moisture is at its lowest.
Posted in News