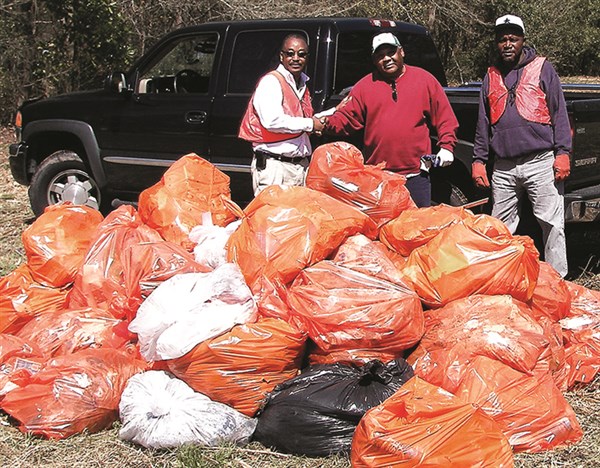 This year’s Springfest cleanup will be dedicated to the memory of Joe Bellamy (center) who died just after last year’s event.

Cleaning up Tabor City’s west side in advance of the 2nd annual Springfest event has been rescheduled until the April 5 celebration, with threatening weather getting the blame.
A front that was beginning to bring rain to the area Friday afternoon had forecasters calling for a 100 percent chance of precipitation on Saturday, with “strong to severe thunderstorms” possible Saturday and Saturday night, the National Weather Service office in Wilmington reported.
“Cleanup day, and all the activities planned with it, have been rescheduled for April 12,” Springfest chair Rev. Llewellyn Dewitt said.
An apple cooking contest, scheduled for 2 p.m. at the church following clean-up day, will also be held on April 12 in First Baptist Missionary Church in Tabor City , Rev. Dewitt said.
Springfest planning is in high gear, Dewitt said, with a prayer breakfast, parade, entertainment, food and crafts, even an aerial stunt demonstration during the 11 a.m. parade.
For more on festival plans see the March 26 and April 2 Tabor-Loris Tribune in print and on-line, like the festival’s Facebook page, or contact the Tabor City Visitor Center at 910-653-4141. Registration forms for the parade, car show, and apple cooking contest, visit here.
Posted in News