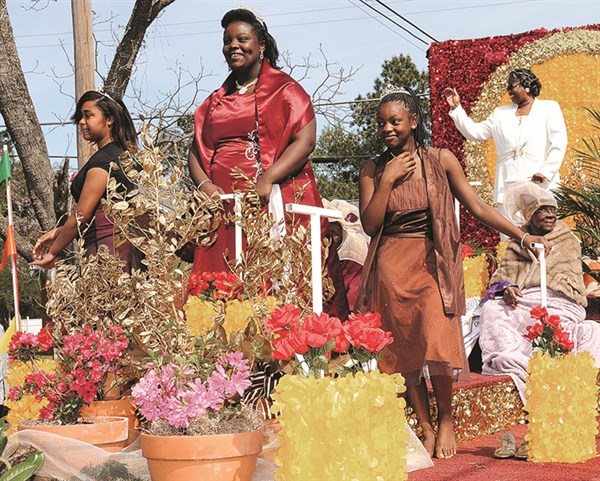 A float entry from the 2013 Springfest Parade. (Deuce Niven photo)

Prayers for better weather this weekend, or at least for Saturday’s second annual Springfest in Tabor City, appear to have been answered positively.
Forecast models from the National Weather Service in Wilmington call for just a 20 percent chance of rain as an 8 a.m. prayer breakfast begins at Tabor City Middle School, dropping to less than 10 percent by the time the Springfest parade begins at 11 a.m. High temperatures for Saturday are forecast in the mid 70s.
Cloud cover during the day may pose a challenge for a new festival event, a stunt pilot flyover during the parade through downtown Tabor City.
Scheduled Springfest highlights include:
•    A prayer breakfast kicking off the day, at 8 a.m., again in the cafeteria at Tabor City Middle School. A fund raising auction will follow breakfast.
•    AA car and truck show, from 8 a.m. to 5 p.m. on West 4th Street from Main to the area of the Tabor City Fire Department.
•    Springfest parade steps off at 11 a.m. at Tabor City Middle School, with a much different route than the 2013 event.
From the school the parade will head east on West 6th Street, cross Lewis and Main streets, before turning right on Wall Street, then right again on East 5th, heading into downtown. A left on Hickman Road will take the parade to Green Sea Road, with a right onto West 2nd Street, another right onto Lewis, then a left onto West 4th Street and on to the Tabor City Middle School rear entrance.
•    Entertainment – Most of the day’s activities will be focused on the Ritz Plaza area, where the stage will host a variety of entertainment.
•    Crafts and booths – These will be located on both East 4th and Live Oak streets, starting at Hickman Road and stretching to the Ritz Plaza area.

Forms
Registration forms for the parade, car show, apple cooking contest, and prayer breakfast are available here. Food and craft vendors will also find registration forms on the site.
For other details like the festival’s Facebook page, contact the Springfest committee at 910-709-8664, or call the Tabor City Visitor Center at 910-653-4141.