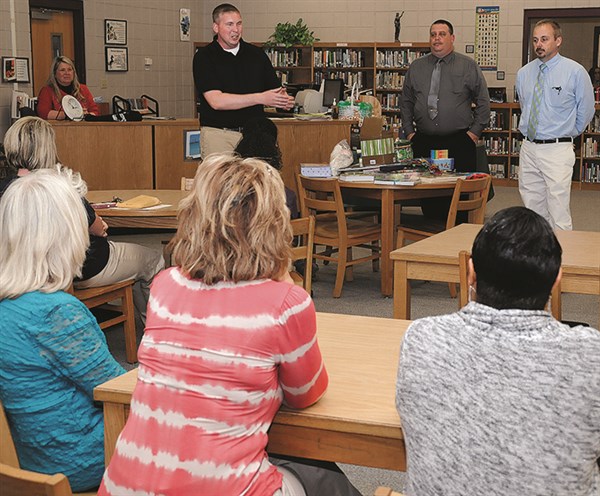 Kyle Hutchison, South Columbus High’s new head football coach, met staff on campus Thursday after signing his contract at the Columbus County Schools Central Office in Whiteville.
Taking part in the introductions were (standing, from left) Hutchison, Assistant Principal Kevin Toman, and Principal Eddie Beck.
Beck welcomed Hutchison “to the South Columbus family,” and said he was impressed with his philosophy of helping to guide students and players to success, not only on the football field, “but also in the game of life.”
Hutchison will begin work at South Columbus on May 8 “at the latest,” he said prior to the gathering. I’m hoping they’ll be able to release me sooner.”
A third year assistant football coach at Richmond Senior High School in Rockingham, the former U.S. Marine said being a head football coach was a long-held dream, one that his family supports. His wife is hoping to be able to transfer here state job, and their son will be a Stallion senior in the fall.