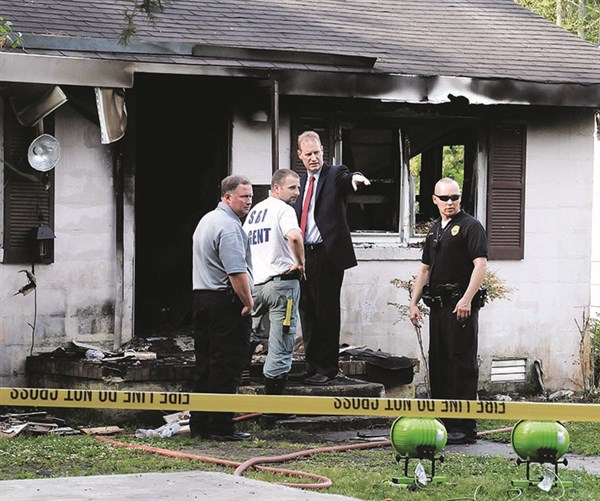 Investigators now know who died in the house they believe accused killer Dion Julius Brown set ablaze early Tuesday, but not how he died.
Eugene T. McQueen, 55 was a resident of the house on West 2nd Street where he died, Assistant Columbus County Coroner William Hannah said Wednesday.
McQueen’s body was badly burned in a fire District Attorney Jon David said Tuesday was set by Brown, who had been sought by the Horry County Police Department for the murder of Malcolm Ray “Mack” Norris, 49, a Tabor City resident who was killed during a robbery Sunday at the Hill’s grocery store in nearby Loris.
Officers were on the way to the West 2nd Street home before 2 a.m. Tuesday when they saw Brown fleeing, and noticed fire inside, David said.
Brown turned on two Columbus County Sheriff’s Office deputies who had pursued him through a wooded area for two blocks, shooting one whose life was likely saved by his body armor, David said.
Both deputies returned fire, killing Brown on a path just off of West 4th Street.
Brown’s death resulted from “multiple gunshot wounds,” Hannah said an autopsy confirmed. Hannah did not know just how many bullets hit Brown.
Both deputies are on paid administrative leave, and the SBI is conducting parallel investigations into the officer involved shooting, and the death of McQueen.
David said investigators are convinced that Brown set the fire at McQueen’s home, but do not know if that’s what killed him.
Look for full details and background on this story in today’s Tabor-Loris Tribune in print and online, and an update on the case in the May 7 editions.

Jack Miller, the radio voice of Tabor City, has died

Could Dustin Chapman be the next American Idol?