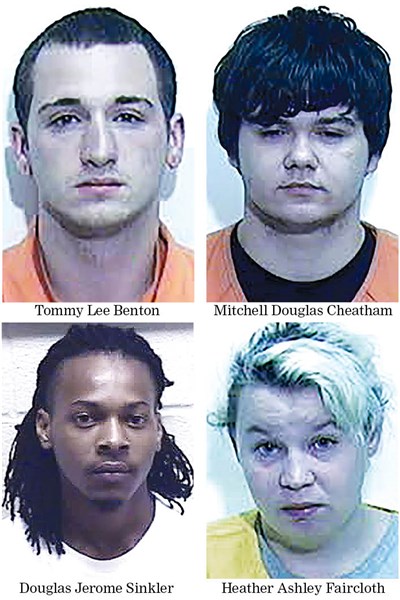 Arrests in the armed robbery of a McDonald’s restaurant here early this week are linked to an Horry County, murder, law enforcement officers on both side of the state line say.
Two of the four people charged in the Tabor City case early Friday are also charged in warrants obtained by the Horry County Police Department with the April 29 murder of an Aynor businessman whose body was found inside his home, which had burned, HCPD Lt. Robert Kegler said.
Autopsy results for Charles Bryant Smith, 69, are not yet available, the Horry County Coroner’s office said.
Tommy Lee Benton, 20, of Pleasant Hill Road near Chadbourn; and Mitchell Douglas Cheatham, 20, of White Plains Church Road near Council in Bladen County; are both charged with murder and arson in the Horry County warrants, Lt. Kegler said.
Benton was taken into custody by SWAT Team members of the Columbus County Sheriff’s Office early Friday, Cheatham was arrested in Bladen County and turned over to Columbus County authorities, Capt. Russell Conway of the Tabor City Police Department said.
Both men are being held without bond on the Horry County fugitive warrants.
Benton and Cheatham were charged in an early-Monday robbery at the McDonald’s in Tabor City. Two men, both wielding handguns, one also holding a sledgehammer, gained entry to the restaurant after telling an employee to open the glass door or he would smash through, Conway said.
After gaining entry to the store safe, and ushering employees into a freezer, the men fled with an undisclosed amount of cash in a store employee’s car, Conway said. That car was later recovered near Chadbourn, burned.
Benton and Cheatham were charged with armed robbery, conspiracy to commit armed robbery, kidnapping and larceny of a motor vehicle, Conway said.
Benton’s fiancé, Heather Ashley Faircloth, 25, of North Lewis Street in Tabor City, was charged with conspiracy to commit armed robbery. She is a former employee of the McDonald’s, who provided the robbers with information on the layout of the store. She is accused of conspiring with Cheatham and Benton, the warrant said.
Faircloth was jailed under a $25,000 bond.
Officers are searching for a third man, who will face the same charges as Benton and Cheatham, Conway said. Warrants have been obtained for Douglas Jerome Sinkler, 29, of Whiteville.
Look here for updates as they become available, and for the full story see the May 7 Tabor-Loris Tribune in print and online.