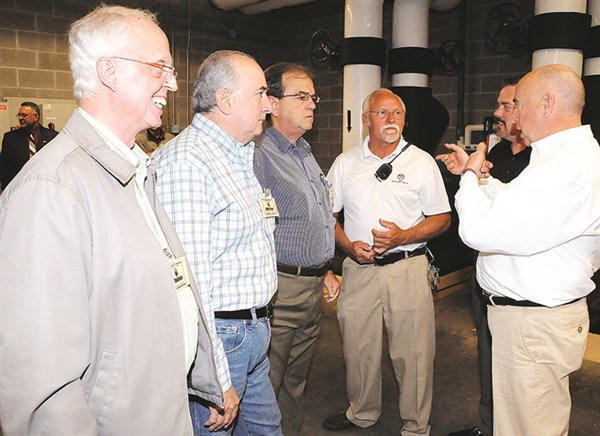 Prison reform in South America is beginning in the country of Panama, with a little help from one of North Carolina’s newest correctional facilities in Tabor City.
Jorge Luis Alemån, Director General of the soon to be opened 5,500 bed La Gran Joya prison in Panama City; and Gerardo Pelaez, a senior adviser to the Minister of Government in Panama; recently took an extended tour deep into the confines of the 1,500 bed Close Custody section at Tabor Correctional Institution (TCI).
They were joined by representatives of Texas based Creative Corrections and TKC Management leaders from Charlotte. They are among three finalists for a facilities management contract for La Gran Joya,, the only one from the US, and used TCI as a showcase for their company.
TKC has managed facilities at TCI since it opened in 2008, though the company is hardly a household name, even within the walls and barbed wire.
That’s exactly as it should be, TKC Division Manager Jason Hahn said.
“If we’re noticed, that mean’s something’s gone wrong,” Hahn said.
Managing the facility means making sure all of the mechanisms inside the sprawling prison work properly, from huge boilers to massive air handling units, automatic doors to security systems.
For prison officials in Panama, making big efforts to reform its prisons, those details are important, Alemån said.
“We will be the biggest prison in all of Latin America,” Alemån said. “This is a new model of prison in Latin America. It’s going to address the over population.
“This is a new beginning for our prisons not only in Panama but in Latin America. We are going to show the world that things are different.”
For more on this story see the May 14 Tabor-Loris Tribune in print and online.