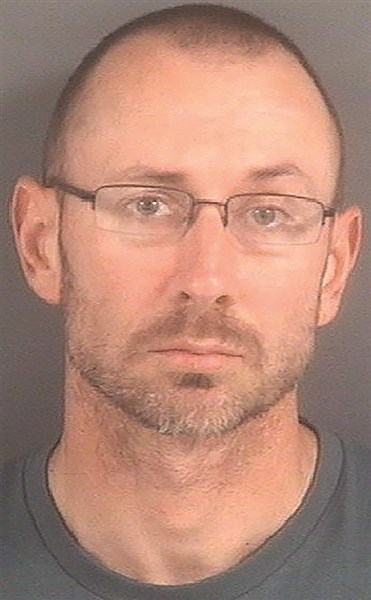 Donald Bryan Beauchaine was fired from the Fair Bluff Police Department on Wednesday, more than a week after his arrest on a secret peeping charge, consulting town manager Al Leonard said.
Town council members voted unanimously, and without comment, to terminate Beauchaine’s employment, after discussing his performance in closed session, Leonard said.
“He was an at will employee, and no reason was given for the decision,” Leonard said.
Beauchaine, 38, was arrested in Fayetteville on June 16, following his discharge from the VA Medical Center, charged on warrants obtained by the Lake Waccamaw Police Department with ten counts of secret peeping. He was transferred to the Columbus County Detention Center the next day, then moved to the Brunswick County Detention Center where he remained on Wednesday under a $15,000 bond.
Warrants say a child was secretly photographed by Beauchaine, using a cell phone, between April 1 and June 4. Those photographs were made at Beauchaine’s home, Lake Waccamaw Police Chief Scott Hyatt said.
Beauchaine was reported missing during the evening of June 4, soon after someone found a camera hidden in his Lake Waccamaw home, Hyatt said. Police believed then that Beauchaine could be a danger to himself, Hyatt said.
Police located Beauchaine in Leland, and he was later admitted to the hospital in Fayetteville.
Beauchaine, a veteran of the U.S. Marine Corp and of law enforcement, was suspended from the Fair Bluff job, without pay, prior to his arrest.