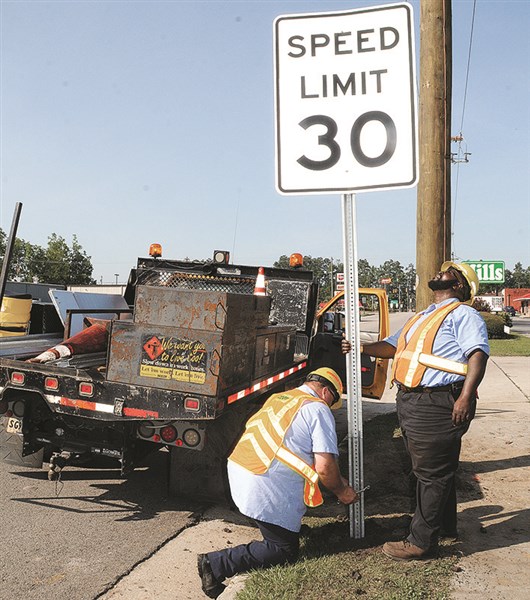 SC DOT workers, Thursday morning, replace a sign at a crash scene where a Loris man died after being shot Wednesday night. Also replaced, earlier, was the light pole behind the sign. (Deuce Niven photo)

UPDATE 10:40 a.m.
David Blanton, 24, of Loris died in the Wednesday night shooting that left his half-brother injured, Horry County Coroner Robert Edge said Thursday.
Blanton was pronounced dead on the scene of the 10:15 p.m. crash when his truck careened into a power pole on the edge of the Hill’s grocery store parking lot on Broad Street, Edge said. An autopsy conducted Thursday morning confirmed that a single gunshot killed Blanton. Investigators are not, for now, where that gunshot wound was.
Scottie Fowler, was taken from the scene to Grand Strand Regional Medical Center in Myrtle Beach, Edge said. Scottie was believed to be a middle name, and Edge said he was not sure of the first name. Fowler was Blanton’s half-brother, sharing the same mother, Edge said.
Check back here for details as they become available, and see the full story in the July 2 Tabor-Loris Tribune in print and online. – Deuce Niven

8:30 a.m. post
A murder in Loris that left a second person less seriously wounded by gunfire is under investigation by the Major Crimes Unit of the Horry County Police Department, spokesman Lt. Robert Keglar said.
Loris Police responding to a one-car crash on Broad Street found both the driver and passenger suffering from apparent gunshot wounds, Kegler said. One of the two died, the other is listed in stable condition at Grand Strand Regional Medical Center in Myrtle Beach.
Detectives ask that anyone with information contact them at 843-915-TIPS (8477).
Check back here for details as they become available, and see the full story in the July 2 Tabor-Loris Tribune in print and online. – Deuce Niven