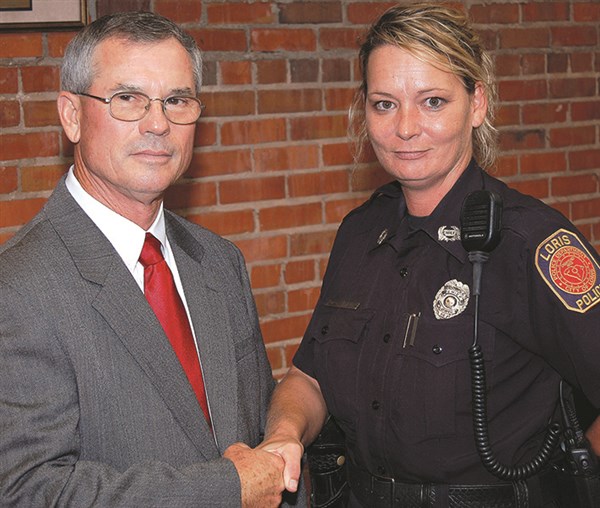 Lt. Karen Shepherd is Interim Police Chief at the Loris Police Department, effective today, with the retirement of Chief Joseph Vaught and action by the Loris City Council on Tuesday.
A 15-year veteran of the LPD, Shepherd was interim chief before Vaught took the post in 2008.
Shepherd was non-committal when asked if she would seek the post permanently.
“We’ll see,” was her response.
Shepherd thanked council and the mayor for their confidence, and pledged to do her best.
Vaught, earlier Tuesday, said he was looking forward to retirement, sort of.
“It’s going to take some getting used to,” Vaught said.
As city council begins seeking applicants for the job, Vaught won’t be far away, Mayor David Stoudenmire said.
“He won’t leave us high and dry,” Stoudenmire said. “He knew that we were already one officer short, and thank God, has graciously agreed to help out if he is needed.”
Vaught will handle some of the paperwork generated by the department, and lend his expertise as needed, Stoudenmire said.
Members of the Finance and Personnel Committee will work with the Public Safety Committee to select a new chief and fill another vacancy in the department, council agreed.
Department leadership also includes shift supervisors Sgt. Richard Kostanek and Sgt. Adam Bell.
Jeff Gore, a former full-time officer, has recently returned part-time.