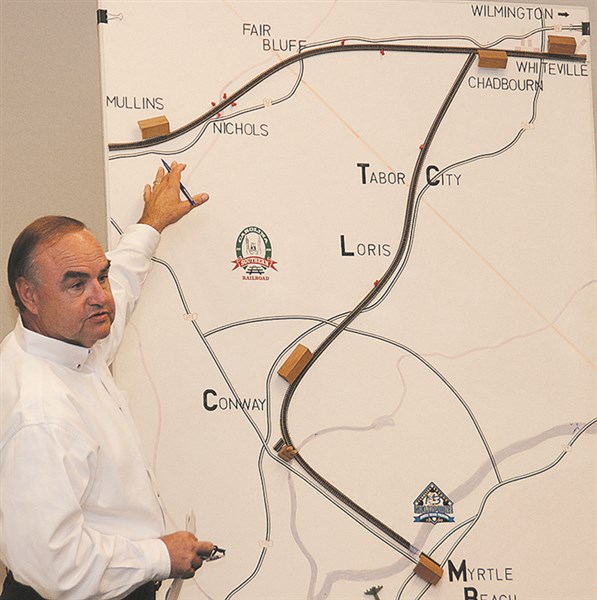 Rail service may be returning to Columbus, Horry and Marion counties with an agreement reached to settle a complaint against the long idled Carolina Southern Railroad (CALA), leaders on both sides of the dispute announced Wednesday.
CALA owner Ken Pippin has agreed to abandon 68.9 miles of rail line in the three counties, setting the stage for selling it, Pippin and Doug Wendell, co-chairman of an ad hoc Interstate Railway Committee (IRC), said in a news release.
Pippin will retain ownership of about seven miles of rail line in Marion County, between Nichols and Mullins, but will allow complete access over those tracks to new owners of the CALA line, necessary to access the nation’s rail system, the agreement said. That access will come with an “industry standard” fee.
IRC leaders have agreed to dismiss a complaint filed with the U.S. Surface Transportation Board (STB) on Aug. 27, 2013 as long as the line is either sold or formally abandoned by Pippin.
That complaint alleged that CALA violated its legal obligation by initiating an “embargo” on the line on Aug. 26, 2011, ceasing rail operations, and failing to either legally abandon the line or repair bridges that failed Federal Railroad Administration inspections
Pippin, in the agreement, agrees to be liable for attorney fees and others incurred by those who filed the complaint, should he breach the terms of the document.
An appraisal of the rail line, begun a year ago, can be completed with the new agreement in place, Columbus County Economic Development Director and IRC member Gary Lanier said.
An appraisal would set the stage for a buyer, if one is located, to take over the CALA’s assets and begin an expensive process of repairing tracks and bridges.
With a buyer, a “voluntary purchase” could be complete by mid-September, Wendell and Pippin said. Without a buyer, the voluntary abandonment process through the STB “could take an additional couple of months.”
In that process, the STB would establish a “net liquidation value” of the rail line authorized for abandonment, allowing CALA to abandon the line of a “financially responsible party” fails to buy the railroad at the STB set price, the agreement said.
Representatives of local governments and businesses who were party to the complaint against CALA have been in the process of signing the agreement revealed on Wednesday, quietly, for about two weeks. Those entities include Columbus County and municipalities of Whiteville, Tabor City, and Chadbourn; Horry County, South Carolina and the municipalities of Conway, Myrtle Beach, and Loris; Marion County, South Carolina; Metglas, Inc. of Conway; New South Companies of Myrtle Beach.
In the agreement, each of those entities pledge “their collective best efforts” to help find a buyer or funding for a purchase of the rail line, “regardless of whether the purchaser is a private or governmental entity/group.”
“We would like to thank the Pippin’s, owners of CALA, and all the Complainants for working together to allow this important process to proceed in an expeditious manner,” said IRC co-chairs Wendell, of Myrtle Beach, and Dennis Worley of Tabor City. “We hope that this process will allow the Railroad to get back operating again soon.”
“We have been waiting for over two years to begin this process,” Pippin said. “Without the adversarial presence of the complaint hanging over us, I believe that we will reach an agreement beneficial to both parties.
“After the sale, a fresh infusion of capital to the railroad will enable it to be a strong partner in the economic growth of two great states and the creation of new jobs.”
For more on this story see the July 30 Tabor-Loris Tribune in print and online.