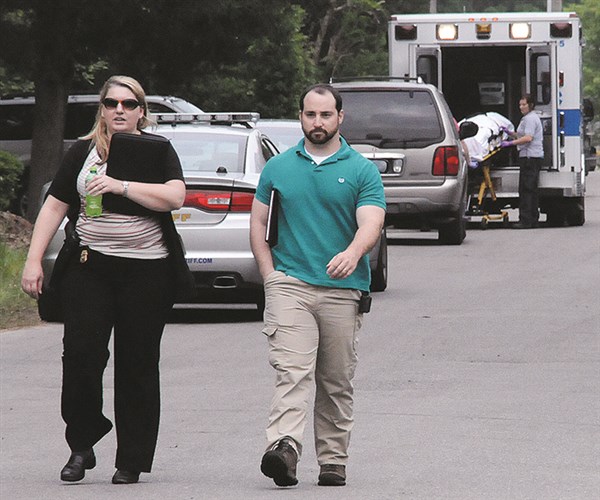 Under fire from a murder suspect who was fleeing the scene of a second killing and arson fire, two Columbus County sheriff’s deputies responded within the law as they returned fire and killed Dion Julius Brown in the early morning of April 29, District Attorney Jon David said Friday.
David, in a news release, said the SBI has concluded its investigation of the officer involved shooting, and after reviewing those findings he determined the Deputy Justin Hern and Deputy Robert Williamson “acted appropriately in addressing the imminent threat that Mr. Brown posed to other citizens. In this context, the officers’ use of deadly force matched the threat presented and is legally justified.”
Brown, 22, of Miller Road, died on a wooded trail where he had ambushed the pursing deputies, firing “multiple rounds, with one round striking Deputy Hern in his ballistic vest,” David said.
Both deputies returned fire, hitting Brown “multiple times and killing him,” David said.
Had Brown survived, he would have faced trial in the murder of Malcolm Ray “Mack” Norris, a Tabor City man slain inside the Hill’s Grocery Store he managed in Loris, South Carolina.
Brown would also have been charged in the death of Eugene T. McQueen, 55, whose body was recovered from the West 2nd Street home Brown set ablaze, with shooting at the deputies, and with shooting Hern, David said.
A separate investigation into the fire and McQueen’s death was not the focus of David’s announcement, though “physical evidence which has been collected and examined conclusively links Mr. Brown to that incident,” the prosecutor said.
For more on this story see the Aug. 6 Tabor-Loris Tribune in print and online.