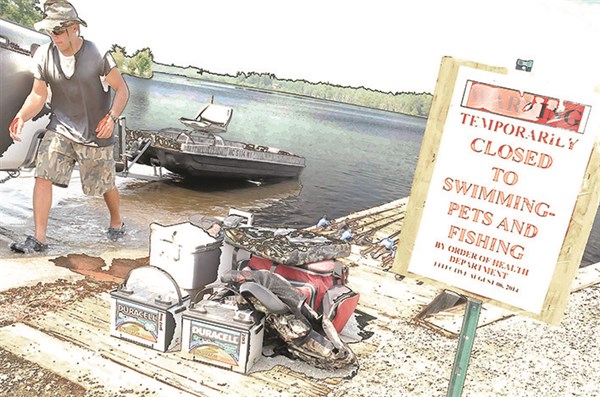 Alex Dial of Pembroke said he had a pretty good day on Lake Tabor, before it was closed to fishing Wednesday afternoon. (Deuce Niven photo)

Lake Tabor was closed to swimming, pets and fishing on Wednesday as the state Division of Water Quality (DWQ) tested for the presence of Bluegreen algae, Columbus County Health Director Kim Smith said.
That decision followed testing last month for fecal coliform, potentially left by geese that have crowded the banks at some lakeside home, Smith said.
Some swimmers at the lake in mid July had complained of an unexplained rash, just as some lake homeowners were preparing to ask the Tabor City Town Council to allow hunting for geese on the lake shore during the one-month season in September. Town law does not normally allow for discharging any firearms in the town limits.
Testing came back with coliform levels well below unsafe levels, Smith said, and prompted the health department to contact DWQ.
Stephanie Garrett, an Environmental Senior Technician for the North Carolina Division of Water Quality, responded to the health department on Wednesday, Smith said.
“She pulled the history on algae at Lake Tabor, and said if you’ve had that many people complain, she would suggest closing the lake to swimmers, pets and fishing,” Smith said. “That is what we are in the process of doing.”
Smith said she spoke with Tabor City Town Manager Al Leonard, who concurred with the recommendation to close the lake, and that health department staff posted signs at the public access area on Lynwood Norris Street, and distributed flyers to homes around the lake.
A water sample was taken from the lake Wednesday, Smith said, and sent to a state lab in Raleigh to be tested for the algae.
“We would hope the results would come back by Friday,” Smith said, “but that’s not guaranteed.”
Check back here for updates as they become available, and see a complete wrap-up in the Aug. 13 Tabor-Loris Tribune in print and online.

Never goes away
Bluegreen algae was first detected in the lake in 2011, its bloom prompted officials to close the lake briefly. A less significant bloom was seen in 2012, not enough to prompt a closing.
“Algae, once you have it, you have it,” Smith said. “It may lay dormant, but it will come back. Why it rears its ugly head, we really don’t know.”
Lake Tabor was closed to swimming and pets in 2011, but not to fishing. Why that is different this time was not clear on Wednesday, but Susan Massengale, a state Department of Environmental and Natural Resources spokeswoman, said the closing was precautionary, pending laboratory test results.

Health concerns
Bluegreen algae, also referred to as algal blooms, contains bacteria that can lead to infection in people with open wounds, and can make humans and animals sick, a particular risk for children and pets, material published by the N.C. Department of Environmental and Natural Resources says.
“While it is safe to boat or fish in the affected areas, the N.C. Division of Public Health routinely encourages the public to avoid contact with large accumulations of the algae and to take precautions to prevent children and pets from swimming or ingesting water in an algae bloom,” a DENR news release said. “North Carolina has had no reports of adverse health effects in children associated with algal blooms.”
As a precaution, DENR and public health officials recommend these steps to safeguard pets and children from any potentially harmful algae bloom:
•    Keep children and pets away from water that appear very green, discolored or scummy.
•    Do not handle or touch large mats of algae.
•    If you come into contact with an algal bloom, wash thoroughly. Also, use clean water to rinse off pets that may have come into contact with an algae bloom.
•    If your child appears ill after being in waters containing an algae bloom, seek medical care immediately.
•    If your pet appears to stumble, stagger or collapse after being in a pond, lake or river, seek veterinary care immediately.