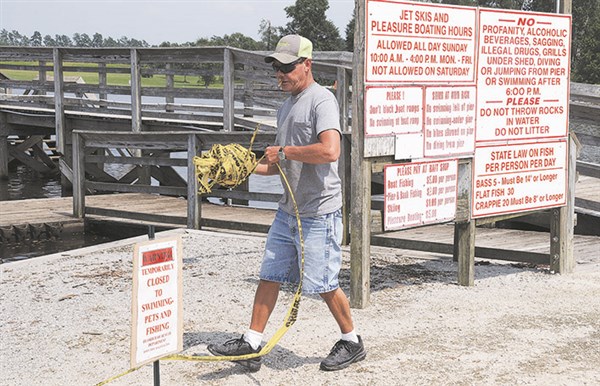 Lake Tabor was open for business before 3:30 p.m. Friday, after lab results showed the water clear from unsafe levels of bluegreen algae.
Columbus County Health Director ordered the lake reopened after receiving results of the tests on a sample taken from Lake Tabor on Wednesday. Lake Tabor had been closed for swimming, fishing and pets since Wednesday afternoon.
“We didn’t find anything that would cause any sort of problem,” said Susan Massengale, Public Information Officer for the Department of Environmental and Natural Resources (DENR).
Closing of the lake was recommended by state officials because of complaints from some swimmers who said they contracted a rash after swimming in the lake in mid-July.
Smith said the decision to close the lake was precautionary, until lake water could be tested for the algae, which forced temporary closing of the lake in 2011.
“Results of the analysis found a normal algal assemblage for a small lake in the summer,” said a report from Division of Water Resources Environmental Biologist Mark Vander Borgh.
Bluegreen algae was present, the report said, “but not at any significant concentration.
“These results indicate the algae collected from Lake Tabor at the time of the investigation would not represent a human health risk.”
Look for more on this story in the Aug. 13 Tabor-Loris Tribune in print and online.