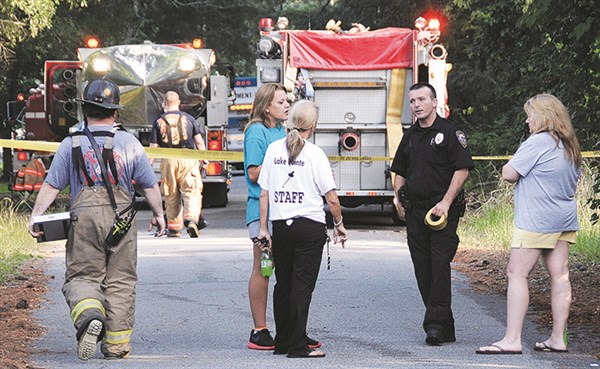 Fires apparently set by one or more burglars on opposite ends of Enzor Street in Fair Bluff gutted one home, with less extensive damage to a second, Police Chief Darrell Trivett II said Tuesday morning.
At least two other homes in the neighborhood were also entered in what appears to be related break-ins, Trivett said, though no fires were set in those houses.
Police have developed leads that may lead to an arrest, Trivett said.
“There’s reason to hope,” he said.
Trivett put the department’s recently acquired K9, Kaas, to work tracking from the fire scene, but did not locate a suspect, he said.
Investigators from the State Bureau of Investigation were called in as Columbus County Fire Marshal Scott Merritt began his investigation, Trivett said.
Beverly Benton’s home just off of Enzor Street on Railroad Street Extension was full of fire when firefighters answered the call just after 5 a.m., and all but destroyed by the time the flames were extinguished, Tabor City Fire Chief Jerry Hodges said.
“If it wasn’t for the brick walls, nothing would be left,” Hodges said.
Firefighters from Tabor City, Cerro Gordo, Chadbourn, Evergreen, and Horry County, South Carolina assisted Fair Bluff Fire and Rescue on the calls.
As firefighters worked to contain the Benton fire, someone spotted fire coming from Kathy Ivey’s home near the south end of Enzor Street. That fire was more quickly contained, with the most serious damage contained to the kitchen area, smoke damage throughout the rest of the house, a Chadbourn firefighter told Ivey.
Ivey said this was her second break-in this summer.
“They stole everything two months ago,” Ivey said.
No one was home at the two houses that burned, both women at their jobs, Ivey said. Two other homes that were entered appeared unoccupied, Hodges said.
Look for more on this story in the Aug. 20 Tabor-Loris Tribune in print and online.