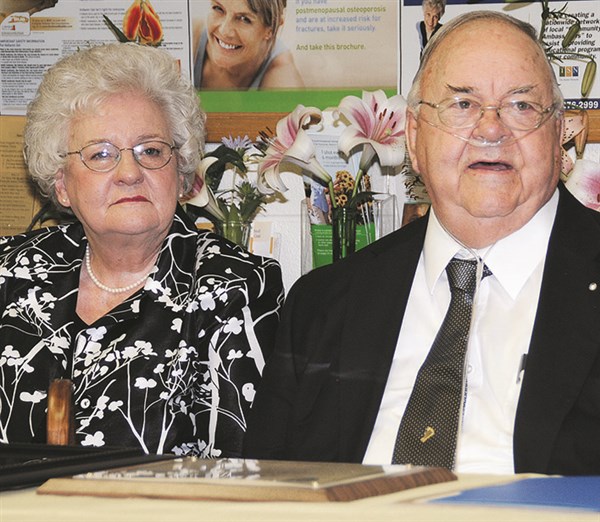 Ed Worley was joined by his wife Barbara Ann during his 2013 retirement program. (Deuce Niven photo)

Naming the two-year-old Columbus County Department of Aging headquarters building in honor of former director Ed Worley isn’t going to happen, with County Commissioners on Tuesday clarifying action taken two weeks ago for less elaborate recognition.
Commissioner Buddy Byrd broached the topic on Aug. 18, suggesting that the building dedicated in August 2012 be named in honor of Worley, who retired at the end of May 2013 after leading the agency for 19 years.
Byrd’s motion, with a second from commissioner Amon McKenzie, stirred debate from Commissioner James Prevatte, who worried action might stir a flood of requests to name other county owned buildings.
Commissioners seemed to agree in August that erecting a plaque noting the efforts of Worley and Congressman Mike McIntyre to secure funding for the building would be sufficient.
But, Board Clerk June Hall told commissioners Tuesday that Byrd’s original motion was never formally amended, and that did not appear to reflect the intent of commissioners.
Board members agreed, except McKenzie, who insisted that Worley should be honored with the building named for him.
Instead, commissioners agreed to have a plaque installed noting the efforts by McIntyre to secure a $450,000 federal grant for the $484,000 project, while noting that Worley was the Department of Aging director at the time.
For more on this story see today’s Tabor-Loris Tribune in print and on-line.