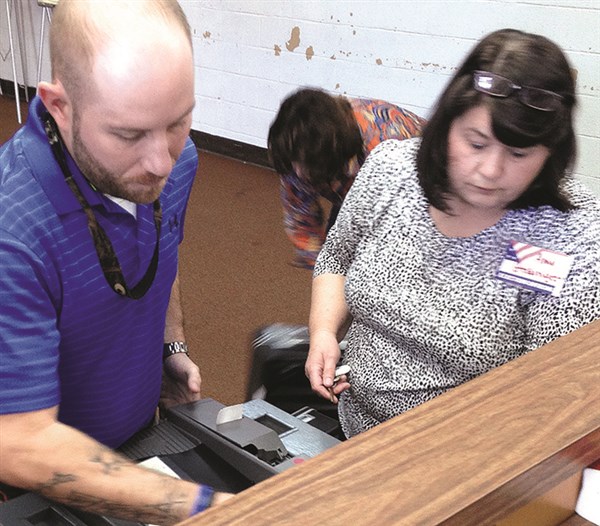 Early voting got underway across North Carolina on Thursday, a bit sluggishly as the doors opened at 1 p.m. at the District Court Building in Tabor City.
First, the electronic ballot box would not work, then a printer used for voter verification forms did, but very slowly.
Derek Kern from the Columbus County Board of Elections had a replacement for the ballot counter in place before the fist voter filled out his ballot, and a technician was assigned to take care of the sluggish printer.
Early voting continues in Tabor City and at five other satellite locations from 1 to 8 p.m. weekdays through Oct. 31.
Early voting at the Columbus County Board of Elections offices in Whiteville continues from 8 a.m. to 5 p.m. weekdays through Oct. 31, and from 7:30 a.m. to 1 p.m. Saturday, Nov. 1.
For those who don’t vote early, election day is Nov. 4, with polls open from 6:30 a.m. to 7:30 p.m.