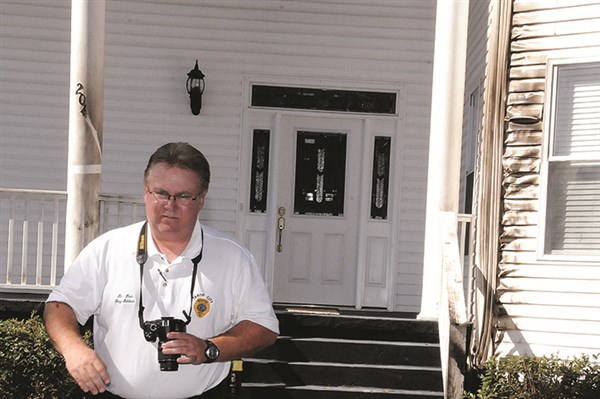 John and Christy Armstrong say their Halloween display was intended to delight and gently frighten children and others this week.
Instead the display, which included a hooded figure hanging by the neck from a rope around a very tall branch in front of their Lewis Street home, has evolved into a felony arson investigation with racial overtones on the edge of Tabor City’s predominantly black west side.
Rumors that those responsible for setting fire to the outside of their home early Monday will be back to finish the job have the Armstrongs, who are white, fearful.
“This was supposed to be something good, something for the neighborhood to enjoy,” John said Tuesday. “We’ve done this kind of thing before, in Las Vegas, in Florida, the kids love it.
“We got past the Yam Festival, and we thought we’d decorate for Halloween, have some fun. We had all kinds of stuff up, ghosts and skeletons and bats, we were going to have scary music coming from inside. We thought we were doing something nice for the community.”
For much more on this story see today’s Tabor-Loris Tribune in print and online.