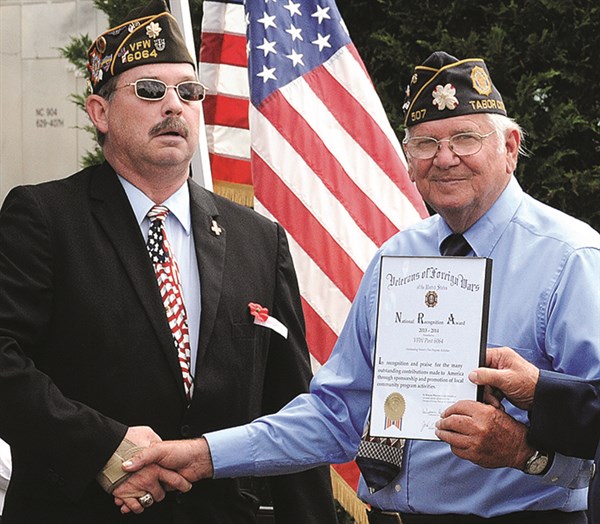 UPDATED UPDATE: Just hours after telling Tabor City Police that there would be no criminal prosecution of Michael Graham, the former VFW Post Commander who has admitted diverting money earmarked for a war memorial, prosecutor’s have reversed course, Tabor City Police Chief Donald Dowless said Wednesday evening.
After reconsidering the case, an assistant district attorney told police late today that the case remains under review, with criminal charges possible, but not a certainty.
Details on the case are below, and in today’s Tabor-Loris Tribune in print and online.
Look for an update in next week’s edition.

UPDATE: Former Tabor City VFW Post Commander Michael Graham will not face criminal charges for transferring funds earmarked for a war memorial to his personal use, Tabor City Police Chief Donald Dowless said Wednesday.
Because Graham was an authorized owner of the account, the District Attorney’s office has determined he had the legal right to access those funds, Dowless said. Details of the case are in the story below, and the full story in today’s Tabor-Loris Tribune in print and online.

ORIGINAL POST:
Michael Graham has resigned as Commander of Veterans of Foreign Wars Post 6064 in Tabor City as local and district VFW leaders look into his diversion of post funds for his personal use, and his embellishment of his service record.
Graham admits he’s done both. He has not been charged criminally, and on Tuesday offered a public apology.
“I’m sorry for everything that has happened,” Graham said. “I’m sorry for what I did. I’m very remorseful about what I did. I did wrong. Please forgive me.”
Graham is also President of the North Carolina Yam Festival at Tabor City. He said he will consider his future with that group after conferring with its directors, a meeting now scheduled for March.
“I’ll talk with (board member and attorney) Richard Wright and everybody else and see where we go from here,” Graham said.
Tabor City police are conferring with the District Attorney’s office, where no decision has been made on criminal charges, Maj. Jerry Sarvis said. Because of the way the pertinent bank account was established, it is not clear that Graham broke the law, Sarvis said.
Graham drained $776 from an account set up to maintain a war memorial located near the Tabor City Public Library. That money has been returned.
That account listed Post Quartermaster David Corbett as the primary account owner, Graham as secondary, giving both access to those funds, Sarvis said.
“Legally wrong, the DA will have to tell me,” Sarvis said. “Morally wrong, sure it is.”
Graham admitted to passing himself off as a retired U.S. Army Major, when in fact he never earned rank higher than Sergeant while serving for a decade in the U.S. Navy ending in 1988, then six months in the U.S. Army in 1991.
His rank claim, too, may not be illegal, though many veterans find that conduct morally indefensible.
President Obama signed the Stolen Valor Act into law in June 2013, legislation that “makes it a Federal crime for an individual to fraudulently hold oneself out to be a recipient of any of several specified military decorations or medals with the intent to obtain money, property, or other tangible benefit,” a White House announcement said.
An earlier law, the Stolen Valor Act of 2005, made it illegal to lie about military service or awards and was overturned by the U.S. Supreme Court in 2011. The high court ruled that law was overly broad and trampled on free speech rights.
For more on this story see today’s Tabor-Loris Tribune in print and online.