Lt. Richard Kosloski of the Tabor City Police Department marks the highway with spray paint before this toppled rig is removed (top photo) and welder Terry Watts cuts a pin holding the chassis to the trailer. (Deuce Niven photos) 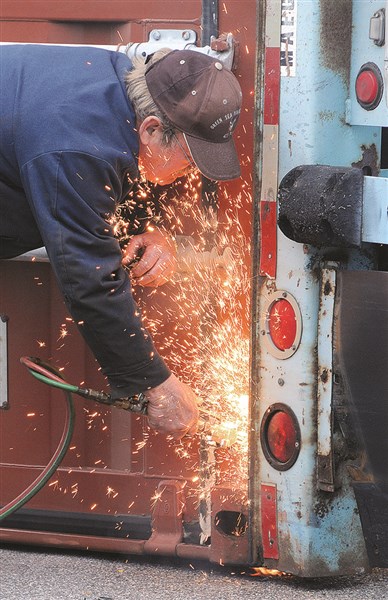 How do you remove 62,000 pounds of trailer containing scrap paper from a busy highway?
Calling in the experts doesn’t hurt.
U.S. 701 Bypass from East 5th Street to Pireway Road was shut down for more than two hours Friday morning after a Hester Trucking truck hauling a load of scrap material from Atlantic Packaging lost its load after turning off of Avon Street.
No one was hurt, the the fully loaded trailer was on its side in the northbound lane, the truck still attached to its chassis pointed south in the center lane, with the difficult prospect of getting the mess out of the highway.
Hester officials called in Joe’s Wrecker Service of Whiteville, and Joe Jacobs Jr. came up with a plan that required separating the trailer from the chassis, that problem solved by local welder Terry Watts who used a torch to cut through the only still pin still connecting the two.
Two wreckers were used to lift the “super heavy” trailer – stickers on it defined the load – and a flatbed rollback trailer was eased under the still toppled trailer, allowing it to be hauled away.
For more on this story see next Wednesday’s Tabor-Loris Tribune in print and online.