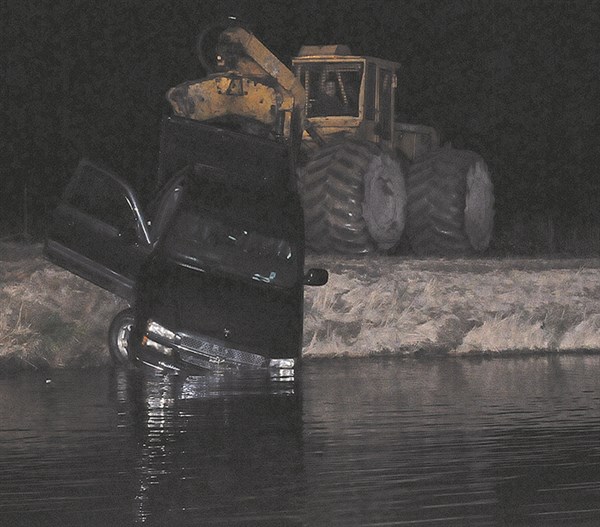 Paul Hinson’s truck is pulled from a pond on his farm Friday evening. (Deuce Niven photo)

A farm accident claimed an elderly man Friday afternoon, Columbus County Coroner Linwood Cartrette said.
Paul Von Hinson, 77, was driving his pick-up truck around a pond on his farm just off of Old Stake Road north of Tabor City when he apparently got to close to the bank, the truck slipping into the water, Cartrette said.
Family members said they saw Hinson about 2:30 Friday afternoon, Cartrette said, and it appears the accident took place between then and 4:30 p.m.
It was nearly 6 p.m. before family members found the truck, its roof barely visible above the water in the pond. Family members dove into the water and pulled Hinson from the truck before Roseland Volunteer Fire Department and Tabor City Emergency Services members arrived, Cartrette said.
Cartrette ruled the death accidental drowning.
Obituary information is available here.