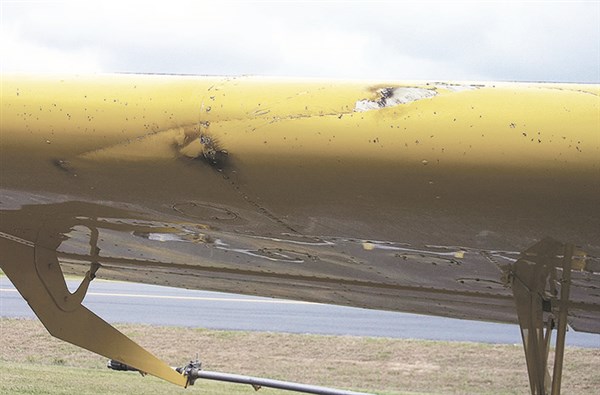 Crop duster Al Allen says he saw the flash when his single-engine crop duster aircraft clipped a Brunswick Electric transmission line Tuesday afternoon, and thought a crash was eminent.
“I really expected in the next minute or two to go in the dirt,” Allen said hours after flying away from the main transmission line that runs along Peacock Road near Rough and Ready Road. “But if flew fine.”
Nearly 3,000 BEMC customers in a swath from Tabor City to Nakina were put in the dark for several hours as a result of the 2:30 p.m. incident, spokeswoman Heather Holbrook said. Power was restored to all customers by 5:30 p.m.
Roseland Volunteer Fire Department Chief Len Fipps said dispatchers told him before he arrived that a plane might have hit the power line.
“I didn’t know what we might find,” Fipps said.
Firefighters found several high-power transmission lines on the ground, no sign of the aircraft, and no one hurt.
“We don’t mess with those kind of power lines, just stay away,” Fipps said.
Allen, his aviation company based at the Conway, South Carolina airport, flew to the nearby Columbus County Airport, just 5.5 miles away. He had time to consider what had happened.
“I was spraying some wheat for a farmer,” Allen said. “I had sprayed and was finishing up, and was making a last pass, dropped down in a little corridor in some trees.
“I saw the main line, thought I had it cleared, and undoubtedly I caught the very top. I saw a flash, never felt the plane pull.”
Allen said he circled Columbus County Airport while making contact with someone on the ground to make sure there was no damage to the airplane that would prevent a safe landing.
Those on the ground could see no damage to the Air Tractor AT-502, Allen’s landing was without incident. There will be maintenance before another takeoff, including a careful inspection of the propeller, which had at least minor damage, Allen said.
For more on this story see Wednesday’s Tabor-Loris Tribune in print and online.