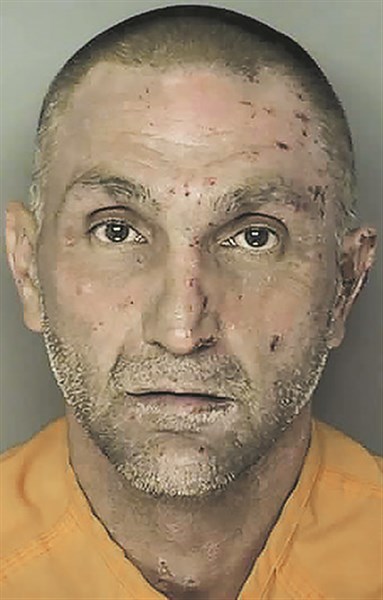 Handcuffed in the back seat of a Columbus County Sheriff’s Deputy’s patrol car Sunday night, a Clarendon area man was able to get his hands to the front of his body, get to the front of the Dodge, and lead officers on a chase that ended minutes later on a rural South Carolina road, Maj. Bobby Worley said Monday.
Nathan Tyler Jr., 42, of Sidney-Cherry Grove Road, Clarendon, will face two felony and five misdemeanor charges when he returns to Columbus County, Worley said. He was taken into custody by the Horry County Police Department, charged there with possession of the stolen patrol car, and held at the J. Reuben Long Detention Center near Conway.
Columbus County warrants charge Tyler with felony counts of larceny of a motor vehicle and fleeing to elude arrest, and misdemeanor violations of resisting police, reckless driving to endanger the public, speeding, failure to stop for blue lights and siren, and failure to stop for a stop sign.
Deputies Justin Walters and Christopher Canady were looking into a series of recent Tabor City area break-ins when they encountered two “suspicious men” in the area of Jernigan Street and Stake Road in Tabor City at about 8:15 p.m. Sunday, Worley said.
As deputies talked with Tyler and another man, they took Tyler into custody on an outstanding probation violation warrant.
Tyler was handcuffed behind his back, and left in the back seat of Walters’ 2008 Dodge patrol car as the deputies continued to talk with the second man, Worley said.
“Somehow he was able to get his cuffs to the front,” Worley said. “He crawled over the seat, and drove off.”
Walter’s patrol car has no back-seat cage for prisoners.
“We’re trying to get cages for all of our vehicles,” Worley said.
Walters got into Canady’s patrol car, as Tyler led the officers on a pursuit that went into South Carolina on Carolina Road, before turning onto Church Road in Horry County, where Tyler lost control of the car.
Tyler was charged by Horry County Police with possession of the stolen patrol car, which suffered only “cosmetic damage” to the right front fender after sliding off the road, Worley said.