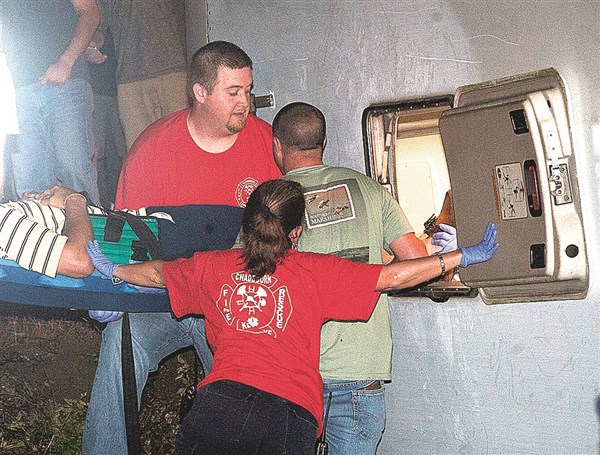 UPDATE: A driver was charged with exceeding a safe speed after the Abbot Trailways bus she was operating overturned into a ditch on a highway detour near Chadbourn early Tuesday, Trooper Melvin Campbell of the North Carolina Highway Patrol said.
Seven people on the bus carrying the Carolina Mudcats baseball team to Myrtle Beach were taken by ambulances to Columbus Regional Healthcare in Whiteville, all with minor injuries, Campbell said. They included five players, a trainer, and bus driver Janice Coffman, 52, of Vinton, Virginia.
Coffman lost control of the bus about 3:45 a.m. in a sharp curve on Clarendon Chadbourn Road, a detour route resulting from a tile replacement project on NC 410, Campbell said. The bus came to rest on the passenger side, with passengers and drivers escaping through roof hatches. Some were removed from the bus on backboards after rescue crews arrived.
Ambulances from Chadbourn/Klondyke Fire Rescue were assisted by crews from Whiteville, Tabor City, and Cerro Gordo.

Original post
An Abbott Trailways bus carrying the Zebulon based Carolina Mudcats minor league baseball team to Myrtle Beach overturned on a rural Columbus County road early this morning, Deputy Emergency Services Director David Ransom said.
Only a few of the approximately 33 team members on the bus were taken to Columbus Regional Healthcare in Whiteville, all with apparently minor injuries, Ransom said.
Forced onto Clarendon Chadbourn Road by a detour on NC 410, the bus overturned about 3:45 a.m. An investigation into the cause of the crash was underway by the North Carolina Highway Patrol.
Those not on the bus were on the way to the county’s Emergency Operations Center about 6:40 this morning, and the American Red Cross had been contacted to provide food as the players wait for a bus.
A scheduled Tuesday night game between the Mudcats and the Myrtle Beach Pelicans was reportedly cancelled.
Check back here for details and see the full story in Wednesday’s Tabor-Loris Tribune in print and online.