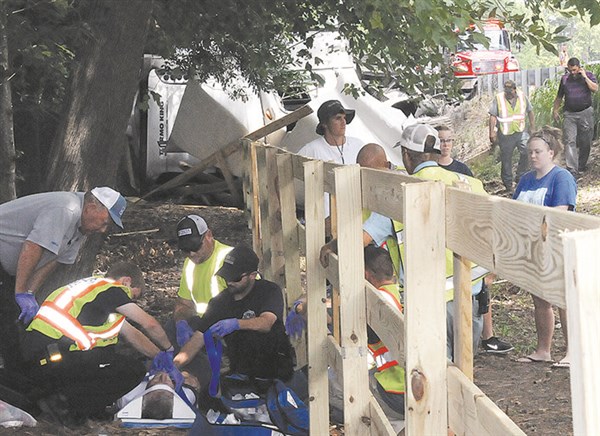 A Lumberton based tractor-trailer hauling for Reddy Ice left N.C. 410 north of Tabor City just after noon Monday and overturned at a steep drop-off, careening through some recently installed horse fencing.
Donald Russ Jr. said he was working outside at the horse farm when he heard the crash, initially thinking one of his animals had gotten loose and been hit on the highway.
Russ rushed to the aid of the truck driver, still inside the badly bent cab, and noticing some smoke got the driver out of the truck and safely away.
Bystanders attended to the driver until a Klondyke/Chadbourn Fire Rescue ambulance arrived, and the driver was still speaking as he was packaged on a backboard and taken to McLeod Loris hospital.
An investigation was underway by the North Carolina Highway Patrol Monday afternoon.
For more on this story see Wednesday’s Tabor-Loris Tribune in print and online.