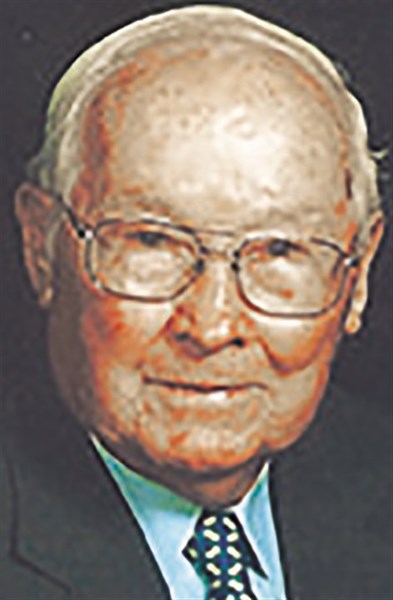 Ashley Connor Mills went home to be with his Lord and Savior Jesus Christ on Sunday, March 20, in his Wilmington home where he was surrounded by family and loved ones. He was 95.
Ashley was born in Tabor City on Aug. 5, 1920, son to the late Egbert Dallas Mills and Osro Melissa Gilmore.
He was preceded in death by his wife of 72 years, Evelyn Hardee Mills, and his two sons, David Raye Mills and Glen Ashley Mills.
Evelyn and Ashley moved from Tabor City to Wilmington in 1941, where he worked at the local A&P Grocery Store, followed by the Wilmington Shipyard during World War II. In 1947, Ashley and Evelyn opened up and operated Mills Superette on South 17th Street, where they worked faithfully side by side for 38 years. Being in the grocery business allowed him to provide for his family for those 38 years until his retirement. In his retirement, his boundless energy allowed him to maintain his role in church activities, maintain his rental properties, and maintain his most beloved hobby, which was gardening-especially growing collards. Alongside his gardening, he loved to tinker with and drive his antique tractor. He somehow found time to go back to work as a greeter at Bob King GMC/Buick, and transporting vehicles for Stevenson Honda for nearly 13 years, where he then retired at the age of 93. He remained active in his daily activities, which included his gardening, until his health began to decline in May 2015.
Ashley and Evelyn were faithful members of Grace Baptist Church for more than 40 years.
Ashley leaves behind two daughters, Betty Sue Mills and Linda Mills Brown (Al); grandchildren, Allison Mills, Matthew Brown (Kristin), Mark Brown (Jessica) and Michael Brown; five great-grandchildren, many nieces and nephews and one sister, Mrs. Reba Jolly of Tabor City.
Family planned to receive friends from 5 to 7 p.m., Wednesday, March 23 at Andrews Mortuary Valley Chapel, 4108 South College Road, Wilmington. (See map)
A funeral service honoring his life was planned for 2 p.m., Thursday, March 24, at Grace Baptist Church, 1401 College Road, Wilmington, (see map), with Pastor Jay Knolls and Dr. JD Herchenhahn officiating, interment following at Greenlawn Memorial Park, Wilmington.
Pallbearers in his honor will be Matthew Brown, Mark Brown, Michael Brown, Gene Creech, Elwood Mills and Ronnie Parker.
In lieu of flowers, memorials may be made to Grace Baptist Church, 1401 N. College Rd., Wilmington, NC 28405, or to Lower Cape Fear Hospice, 1414 Physicians Dr., Wilmington, NC 28401.
The family would like to extend their appreciation to the care team at Lower Cape Fear Hospice for coming into the home and assisting with his care in his final days. Also, a special thank you to a dear lady, Jennifer Lewis, for providing exceptional care to Ashley as his daily caregiver during the last few months of his life. We would also like to thank Dr. Charles Almond, Dr. Frank Hobart, and Dr. Christopher Barber for providing years of exceptional care to Ashley during his energetic life.
Online condolences may be sent to the family here.