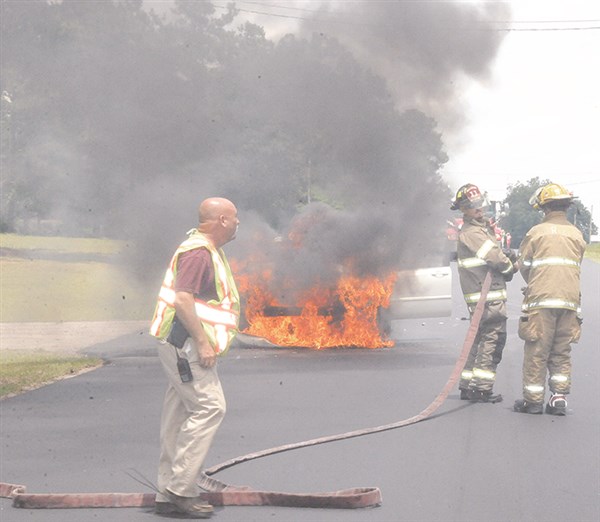 What appeared to be a relatively minor rear-ender crash on NC 410 approaching U.S. 701 in Tabor City turned fiery with the engine of the rear car erupting in flames about 1 p.m. Friday.
Occupants of both cars were out, and said they were OK as Tabor City Police Department and Fire Department personnel arrived. Firefighters quickly attacked the flames, calling the situation under control in minutes.
Traffic backed up quickly on NC 410, especially to the north, where volumes are typically heavy most Friday afternoons and Saturdays during the busy beach tourism season. Detours were being established for the short term, until wreckers could pull the vehicles away.
Some damage to the roadway seemed likely, TCPD Maj. Jerry Sarvis said, with the asphalt there freshly re-paved, center lines not yet painted.
Look for more on this story in Wednesday’s Tabor-Loris Tribune in print and online.