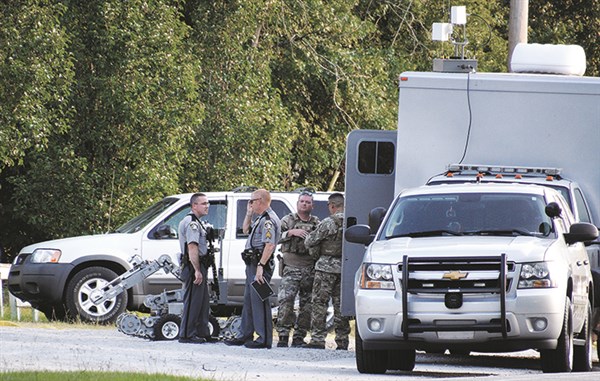 A quiet standoff behind Sambo’s, a state line bar, was resolved with a man in the custody of the Horry County Police Department shortly after 9 p.m. Friday.
Witnesses said police were there to arrest the young man earlier in the evening, around 6 p.m., and that he sought refuge in the mobile home where he lives, directly behind the bar.
A heavy police presence was in place quickly, including HCPD’s SWAT team, and its robot, though it’s not clear the device was used.
Numerous officers armed with long rifles were in the area, and officers had SC 410 blocked both north and south of the bar.
It appeared that tear gas or a similar agent was used to force the man from the mobile home, and he could be seen in the custody of police, awaiting a medical evaluation from Paramedics.
More specific information was not immediately available from the Horry County Police Department Friday evening. A deputy at a checkpoint said the department did not have a public information officer on the scene.
For more on this story see Wednesday’s Tabor-Loris Tribune in print and online.