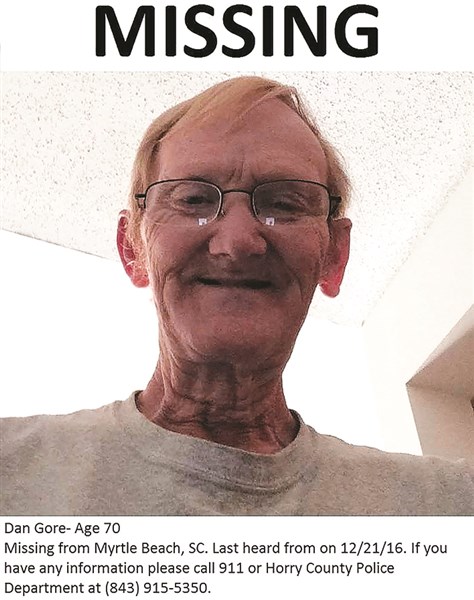 UPDATE: Dan Gore has been found, Lt. Raul Denis said about two hours after the man with Tabor City and Myrtle Beach ties was announced as missing.
Gore was found safe and sound, Lt. Denis said.
No further details were provided. Look for updates here, and in the next Tabor-Loris Tribune in print and online.

A former Tabor City man apparently last seen in mid-December after buying a car in Myrtle Beach is the subject of an ongoing law enforcement search, the Horry County Police Department says.
Dan Maurice Gore, 70, who has most recently been living on Tibton Drive in Myrtle Beach, bought a car at Myrtle Beach Mitsubishi on Dec. 14, 2016, though he does not drive, and someone else drove the car home for him, the report by HCPD Officer John Stegall said.
An acquaintance told police Gore moved out of his Myrtle Beach home around Dec. 21, 2016, did not say where he was going, and hasn’t been seen since by any friends or acquaintances since.
That car was involved in an auto crash on Christmas day, the report said. A South Carolina Highway Patrol sergeant told Stegall that witnesses said a woman was alone in the car at the time of the wreck, that she got out of the car, got into another, and left the area.
While what happened to Gore is unclear, the report says “No foul play suspected,” but that police want to contact him.
Though Gore formerly lived in Tabor City, the acquaintance who spoke to police said it was unlikely Gore would return to the border town.
Gore is described as six feet one inch tall, weighing about 150 pounds, with red hair.
Anyone who knows where he might be is asked to contact local law enforcement, or Horry County dispatchers on their non-emergency line, 843-248-1520.
Look for updates on this story, as they become available, here and in the next Tabor-Loris Tribune in print and online.