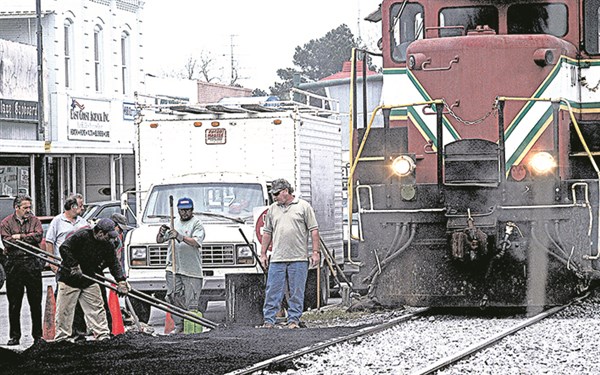 Rail repairs in Tabor City in this 2003 file photo

Rail crossing improvements in Tabor City and new water and sewer lines in Chadbourn will force detours on two highways, NC 904 and NC 410, beginning next Wednesday.

Chadbourn
Contractors for the Town of Chadbourn will close N.C. 410 (Brown Street) between East Railroad Avenue and East Third Avenue in Chadbourn in order to replace aging water and sewer lines, part of a major upgrade to the town’s infrastructure, the DOT said.
That closure is expected to last at least six weeks, through March 15, with additional lane closures and delays on NC 410 in downtown Chadbourn continuing through April 1.
Drivers can get around the closure by using U.S. 76, Grist Road and Braswell Road/West Railroad Avenue.
Commercial trucks traveling through the area, and motorists traveling to and from the N.C./S.C. beaches are recommended to remain on U.S. 74 to Whiteville and then take U.S. 701 to Tabor City, the DOT said.
Real-time travel information may be found at visit DriveNC.gov or by following NCDOT on Twitter.