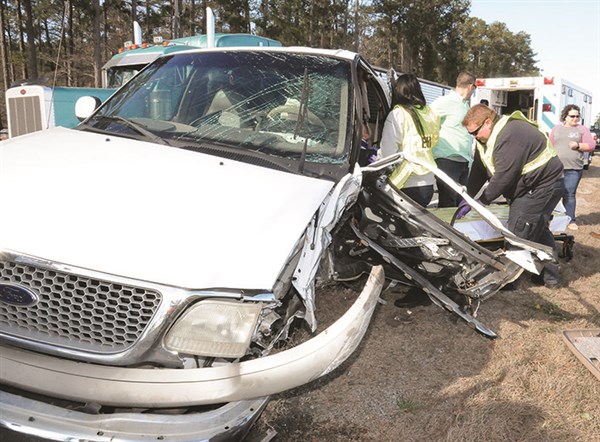 A second head-on auto crash in as many days on NC 410 north of Tabor City left a man seriously injured Friday afternoon.
Heavy extrication tools were used by the Tabor City Fire Department to free the man in a Ford pick-up truck following the crash just before 2:30 p.m. near New Horizon Church. Tabor City Emergency Services took the man to McLeod Loris hospital, where a helicopter was called to transfer the man to a trauma center.
Witnesses said the southbound pick-up crossed the center line for reasons unknown, into the path of a large gravel-filled dump truck. The big truck overturned into a ditch on the opposite side of the truck after colliding with the pick-up, which came to rest just feet away from a gasoline tanker truck that had been behind the gravel truck.
A gasoline tanker from the same company was involved in a similar crash early Thursday morning, just a few miles to the north. In that incident, a Tabor City man in a car was killed.
Look for details on both stories in the next Tabor-Loris Tribune in print and online.