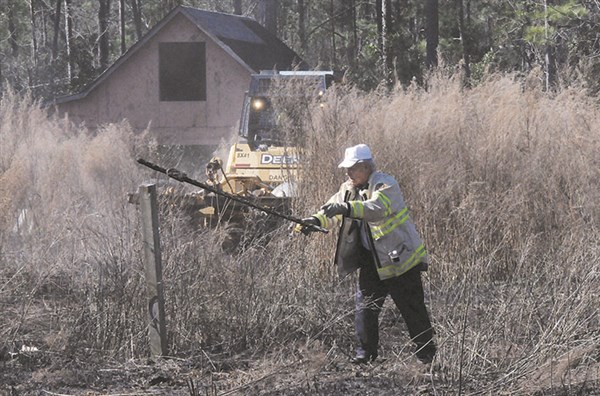 What started as a small debris fire got away from property owners on Peacock Road Tuesday afternoon, claiming two unoccupied mobile homes before fire crews from Tabor City and Williams Township halted the blaze, Columbus County Deputy Fire Marshal Josh Cartrette said.
Fire crews were called to the area of Peacock Road just south of Horace Cox Road just after noon, and found fire moving quickly through the dry grass, igniting the trailers, and moving into the woods.
A North Carolina Forest Service plow was called in to isolate the fire. Neighbors, including a work crew of property owners from Charleston, worked with fire crews to keep flames away from several other homes, some using garden hoses to wet grass in their yards.
“There’s no burning ban in place now,” Cartrette said, “but we strongly advise that nobody burn with the winds up like they are.”
Look for more on this story in this week’s Tabor-Loris Tribune in print and online.