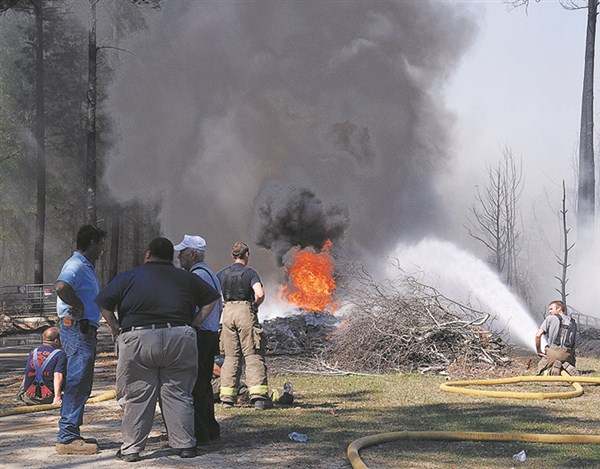 A big mound of tires burned at the end of Deer Lane east of Tabor City Tuesday afternoon in a fire apparently resulting from an effort to get rid of some yard debris that got out of control.
First responding firefighters reported up to 2,000 tires involved, prompting the Tabor City Fire Department to receive aid from Nakina, Roseland, Williams Township and Loris departments, most of that assistance in the form of tankers for water supply.
Fire retardant foam was also brought in on Columbus County’s Air Truck, supplement limited supplies available from the local departments.
Tabor City Fire Chief Jerry Hodges declared the fire under control after about 90 minutes, releasing some crews while others remained, continuing to use water and foam on the difficult to extinguish tires.
A N.C. Forest Service plow cut a line to keep flames from spreading through a wooded area they entered.
Look for more on this story in this week’s Tabor-Loris Tribune in print and online.