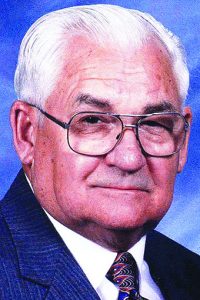 John Linford Cox of Loris passed away peacefully at home after a courageous battle with cancer on June 8. He was 85.

Born in Horry County (Loris), May 17, 1932, he was the son of the late John Quincy Cox and Lena Skipper Cox of the Simpson Creek community.

He served in the U.S. Army during the Korean Conflict and was continually employed for 56 years, holding positions with the Merita Bread Company as a route manager, Hardee Manufacturing Company, John Deere and Waccamaw Floor Covering.

He was a member of Loris First Baptist Church where he served as a Deacon and was also church treasurer for 20 years.

He is survived by his loving wife of 61 years Etheleen Prince Cox; a son, Timothy Linford Cox, his wife Amy and one beloved granddaughter Grace; three sisters, Lois Cox of Loris, Elaine Cox Squires of Aynor and Hilda Cox Goode of Charleston Heights.

He was preceded in death by one son, Lyndon Clyde Cox; two sisters, Letha Cox Powers and Dorothy Cox Hardee; and a brother, Elvis Cox.

Family would especially like to thank his care team from McLeod Hospice for their support during this time.

Visitation was planned from 4 to 6 p.m. Sunday, June 11, at Hardwick Funeral Home, Loris.