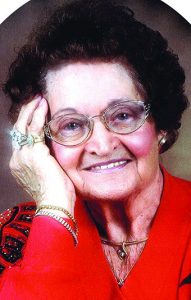 Muriel Register Robinson of Loris passed away on Thursday, June 15 at McLeod Loris hospital after a brief illness. She was 95.

Mrs. Robinson was born in Herald, Virginia on Aug. 2, 1921, a daughter of the late, Lonnie Payne and the late, Nellie Winebarger Payne.