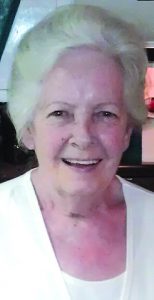 Inez Grainger Johnson of Green Sea died Monday, July 3, in her home. She was 76,

Born June 27, 1941 in Horry County, she was the daughter of the late Ed Grainger and Jannie Greenwood Grainger and the widow of Jackie Johnson.

In addition to her parents, she was predeceased by three brothers and three sisters.

Visitation was planned from 6 to 7 p.m. Wednesday, July 5, in the Inman Ward Funeral Home Chapel, Tabor City, with the funeral immediately following.

A graveside service was planned for 2 p.m. Thursday, July 6, in the Collins Fowler Cemetery, Loris.