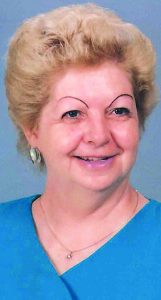 Born Jan. 22, 1942 in Columbus County, she was the daughter of the late B.J. Williams and Elneta Fowler Williams.