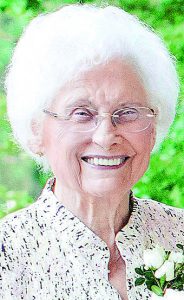 Born in Columbus County, she was the daughter of the late Ransom David Fowler and Missie Strickland Fowler. She was preceded in death by her husband, Radner Charles “RC” Dew; a daughter, Cathy Jo Dew; one sister and two brothers.

She was a member of Carolina Baptist Church where she attended faithfully with her husband for many years.

Visitation was planned during the 90-minutes preceding the funeral service, at the church.