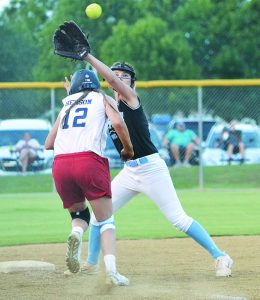 Alex Chestnutt reaches for the ball, trying to tag a Louisiana player Monday.

Fighting to the last out, the Dixie Debs from Columbus County suffered their first loss of their World Series in Louisiana Tuesday night, falling to a tough Tennessee team 10-6 in the semi-finals. 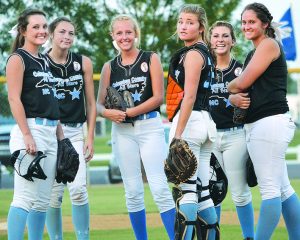 Dixie Debs on a better day, still in play Wednesday.

Look for the series recap, to date, in tomorrows Tabor-Loris Tribune in print and online, and series updates here when available.

World Series play ended the way it began for the North Carolina champion Dixie Angels X-Play squad from South Columbus, with a loss to South Carolina.

Two South Carolina teams will be playing for the championship Wednesday, hosts Sumter County and the state champions that took down the North Carolina winners 7-2 in the opening round Saturday, 8-1 Tuesday night.

NC champions Dixie Debs from Columbus County, undefeated to date in that World Series in Louisiana, was down 6-4 against Tennessee in the top of the 5th inning at about 9:45 p.m. EDST.

Look for update here when available, and a rundown of both series in tomorrow’s Tabor-Loris Tribune in print and online.

A resilient South Columbus squad has a chance at redemption in Dixie Softball Angels X-Play World Series play in Sumter tonight, facing South Carolina in a rematch of the opening round that was won by the Palmetto State girls.

Game time for the Angels semi-final pairing is 8 p.m. 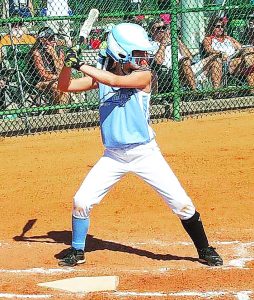 India Sammons on the mound for the Angels.

Dixie Debs from Columbus County will be working to keep their undefeated streak alive in their quest for a World Series title, taking on Tennessee for the first time at 8:30 p.m. EDST.

North Carolina is the only undefeated team left in the Dixie Debs series in Alexandria, Louisiana claiming a 6-3 victory over that state’s champions on Monday. 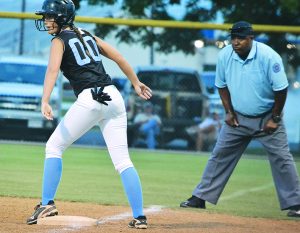 Paige Gore makes it to first base on a bunt in the Debs series Monday.

Both series are expected to conclude Wednesday.