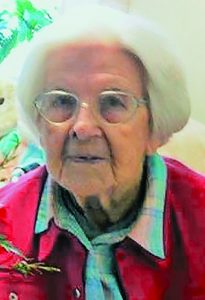 Ruth Fowler of Loris of Loris died Thursday, Aug. 3, in Loris Rehab and Nursing Center. She was 104.

Born April 3, 1913 in Horry County, she was the daughter of the late Sally Florence King and the widow of Montgomery “Mack Gumry” Fowler.

In addition to her mother and husband, she was predeceased by three brothers, B.C. King, Warren King, and T.J. King.

Visitation was planned for the hour preceding the service in the funeral home.

In lieu of flowers, family requests that donations be made to a church or charity.